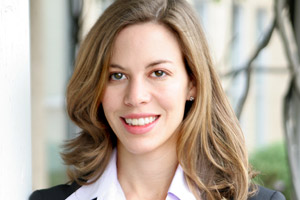 Ashley Riveira once paced the tree-shaded sidewalks and staircases of PUC’s campus, taking time to chat with a friend or rushing to make an early class. Now she strolls the halls and offices of a law firm in Washington D.C., practicing both international law and labor and employment law in one of the country’s most exciting legal climates.

Her story became even more remarkable this May when Riveira, along with nine more of America’s most promising young professional women, won Running Start’s “Women to Watch” award. The award is given to young women who use their positions of leadership to aid the cause of women’s rights. Riveira was recognized for “Presumed Equal: What America's Top Women Lawyers Really Think About Their Firms,” the book that she co-wrote with a classmate from Harvard Law School.

Of course, Riveira’s transformation from PUC-ite to nationally recognized up-and-comer did not happen overnight. After her graduation from PUC in 2001, she spent a couple years in the Napa Valley before applying and being accepted to Harvard School of Law. The transition from a small liberal arts college, quietly nestled in the hills of the Napa Valley, to one of America’s most prestigious and competitive law schools was surprisingly smooth. “I felt well prepared for Harvard,” she remembers. “I knew how to study, how to hold my own in my classes and in campus life.”

In her time at PUC, Riveira tried to maintain a balance between her coursework and a healthy social life. Dr. Richard Voth, who taught Ashley in several classes, describes her as “always busy” and “full of life.” He is not surprised that she received recognition on a national scale. “We’re proud of Ashley,” says Voth, professor of business administration. “She’s a great example of the continued success that we have seen with students from our business department.”

While living in the Napa Valley, Riveira was already preparing herself for a career in law, working with U.S. Representative Mike Thompson of California’s first Congressional district. There she dealt with immigration issues, an area in which she still does pro bono work today. She enjoyed her work with Representative Thompson, which played a part in her decision to apply to Harvard Law School.

It was in her third year at Harvard that Riveira came across the original “Presumed Equal,” study published in 1995. The book was an investigation of what it was like to be a woman at America’s top law firms. “Most law students who go into private practice choose their firms during their second year of law school. I wish I’d had that kind of resource when I was interviewing at firms,” she admits.

Although she recognized that the book was a great source of information for recruits, it needed updating. Along with her friend and fellow Harvard Law student, Lindsay Blohm, Riveira set out to write a new edition, collecting surveys from nearly 4,000 female attorneys who worked at 105 of the nation’s most prestigious law firms. Their version of “Presumed Equal” was published in 2006.

The Women to Watch Award is presented by Running Start, a non-profit organization that educates young women about politics and encourages them to become political leaders. It was Riveira’s work on “Presumed Equal” that brought her to their attention. Susannah Shakow, president of Running Start, recalls the committee’s reason for choosing Riveira: “Ashley was chosen because we felt her work was groundbreaking… Her book is key to understanding why there is so much attrition in law firms of women, and why so few make partner.”

Running Start recognizes young women in part to encourage them to run for political office. Though she isn’t ruling out political involvement, Riveira has no current plans for it, saying, “I‘m always looking for the next interesting professional project, but I’m in my second year out of law school, and I’m just trying to hone my skills as an attorney. I love what I do.”

The department of business administration and economics at Pacific Union College is one of the largest on campus with over 150 students. Many of the department’s graduates have gone on to excel in the nation’s top law schools, including Harvard and Georgetown Universities.
Prev ArticleNext Article