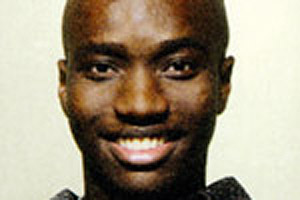 The campus community at Pacific Union College mourns the sudden loss of one of our students.

David Egwakhe, a senior nursing major, died Monday night after sustaining a head injury during an intramural basketball game in PUC's gymnasium. He was 21.

Egwakhe collided with another player during the game, but continued to play for several minutes. During halftime, Egwakhe collapsed, exhibited signs of a seizure, and lost consciousness. Bob Paulson, physical education professor, immediately performed CPR on Egwakhe while emergency medical services were called. Despite CPR and the efforts of emergency responders, Egwakhe never regained consciousness. He was transported via ambulance to St. Helena Hospital where he was later pronounced dead.

Faculty, administrators, counselors and the campus chaplain joined students in the college's Dauphinee Chapel to pray and reflect on this tragedy.

A native of Nigeria, Egwakhe was one quarter shy of completing his A.S. degree in nursing. His sister, Ruth Egwakhe, is also a nursing student at PUC.

" He was a wonderful student with warmth and quiet dedication to his studies," says Joan Hughson, Egwakhe's faculty advisor.

Egwakhe has two other sisters, Titi and Kumbi, living in Nigeria. His parents are living in the Philippines where his father, George, is treasurer of the Southern Asia-Pacific Division, and mother, Victoria, is the international student counselor at the Adventist University of the Philippines.

" David was a fun, loving and caring person," says sister Ruth. "He enjoyed sports, especially basketball. He loved being a nurse and hanging out with his friends and family."

A memorial fund has been established to offset travel and burial expenses for the family. Contributions may be made to the David Egwakhe Memorial Fund, c/o Pacific Union College, One Angwin Avenue, Angwin CA 94508. Memorial services are pending.

Your thoughts and prayers during this time are greatly appreciated.
Prev ArticleNext Article