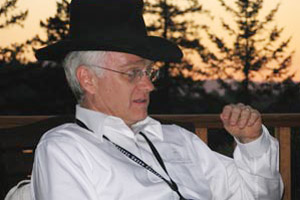 For 30 years, Eric Anderson has been propounding historical discussion in Irwin Hall. That’s plenty of time to get thoroughly involved in campus life, make a lasting impression on countless students, and build rapport and memories with colleagues. Which is exactly what Anderson has done. “Anderson has been part of the academic soul of PUC,” says President Richard Osborn. Anderson has been the chair of the history department, director of the Honors Program, presiding officer of Academic Senate and Educator of the Year—to name a few. “He’s done remarkable things on our campus,” adds Academic Dean Ileana Douglas.

In spite of his involvement in so many aspects of PUC, Anderson’s main role has been in the classroom, where his teaching interests included African American history, the American South, and American political thought. These interests spilled over into three published books, plenty of shorter writings and a stint as Fulbright Professor at Ionian University in Greece.

Midsummer, Anderson received and accepted the offer to become president of Southwestern Adventist University in Keene, Texas. With mixed feelings of pride and regret, Anderson’s colleagues gathered for a farewell that took place on the deck of the presidential house. As a glorious sunset lingered over the hills, PUC people demonstrated their fondness for Anderson—and for a good joke. The “roasts,” presented by current and past PUC presidents Richard Osborn and Malcolm Maxwell and by many of Anderson’s colleagues, took on the form of musical parodies, some apropos readings, and plenty of jesting about Texas (including the presentation of a cowboy hat, a rifle with the barrel bent to point back at the shooter, and a medallion of the state of Texas).

Osborn, who explains that Anderson “served as an invaluable personal advisor as I transitioned into PUC’s presidency,” calls Anderson’s appointment “an honor for PUC.” And though Anderson’s colleagues wish him a successful transition, it is very clear that he will be immensely missed on campus.
Prev ArticleNext Article