A Cogeneration Plant and Lots of Other Stuff 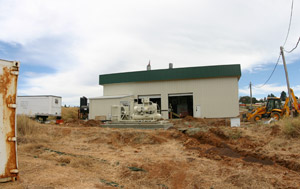 There’s an epidemic of hard hats and giant trucks on campus this summer—not to mention the massive trench that’s being excavated right through campus. It’s all a little mysterious to those of us who are mere sitters-in-offices or drivers-through-campus. When you talk to the people who have an “in” on the happenings, they tell you all about excavators, about switching over to 12KV, about condensate lines, and about trench details from A to V. Which only adds to the mystery.

In layman’s terms, what it comes down to is this: a cogeneration plant and an associated electrical upgrade—and lots of other stuff.

All these things are being done this summer. But over and above it all is “The Cogen” —the new cogeneration plant with its hefty building at the top of the hill and its 5-foot-wide (and sometimes 9-foot-deep) trench running down through campus and necessitating the temporary closure of College Avenue.

Dale Withers, supervisor of campus planning, design and waterworks, usually spends his summers working on underground projects and locks, keys and signage. But, like so many others on campus, Withers is working on those projects on the side and devoting most of his time to the electrical upgrade and The Cogen. “It’s been an incredibly wild summer for us!” he says.

A high voltage upgrade on campus, Withers explains, has been ongoing for the last three years. Now there’s a sudden rush to complete it, since it must be in place for the cogeneration plant to function. New transformers are popping up around campus, and electricians are busy pulling in heavy cables. Power outages encompassing the entire campus descend when the crews are ready to connect the new system. (For some reason, they don’t want to do it while the wires are live!)

Wither’s explanations are interrupted by a radio message that a water line near Public Safety may have broken. He facilitates the discussion between a physical plant worker and a Public Safety officer, arranges for follow-up on the problem, and returns to our conversation. “Crazier than it’s ever been!”

The scramble isn’t all bad. Though it can become overwhelming, Withers says that some days it’s kind of fun. He recollects with a grin when the trench was being dug down the steep hill behind Public Safety. “The guy driving the excavator was great: he was out there wearing his cowboy hat … and when he came over that slope and the excavator started sliding sideways, he didn’t bother to put on his seatbelt—he just lowered the bucket, set his Big Gulp down behind him, turned up the stereo, and kept going.”

So we keep sitting in our air-conditioned buildings and cars and watch the hard hats bobbing through the campus, knowing there’s an impressive world of action going on out there and admiring the chic look that orange cones and DETOUR signs bring to PUC!
Prev ArticleNext Article