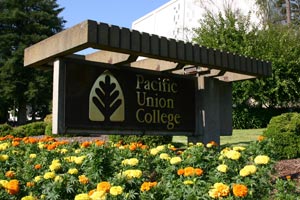 There are some new faculty members inhabiting campus offices these days. We’re delighted to welcome them to the campus and to PUC life.

Bruce Rasmussen, who has a doctorate in music and has taught music since 1981, is our new director of choral and vocal studies. His wife Rosalie, who has a master’s in music, is the director of Paulin Center for the Creative Arts and a professor of music education.

Jeni Guth, who graduated from PUC in 2003, now teaches in the nursing department. She completed a pediatric nurse residency at LLU's Children's Hospital and has begun work on her master's in nursing degree.

Jimmy Ha and Ross Winkle are both new to the religion department, with Ha (who is also a PUC alumnus) focusing on ethics, philosophy and theology while Winkle teaches Old and New Testament classes. Both Ha and Winkle are doctoral candidates at Andrews University.

In the history department, Andrew Caldwell (PUC Class of 2005) is teaching several classes this year. Caldwell’s areas of interest are 19th-century America and the American civil war.

There are also some non-faculty folks we’ve been seeing a lot of around campus. For instance, there are two new deans in Newton, and both of them are PUC alumni: Jonny Halversen, who comes from Walla Walla, and Robert Kurtz, who has his master’s of divinity from Andrews and has been everything from a pastor to a math teacher to a deputy sheriff.

Pam Sadler is our new vice president for development. She has a biology degree from Southern Adventist University and has worked as a development professional and a mentor and trainer of philanthropy personnel.

Jessica Shine, who graduated in 2001 and was religious vice president for two years while a student at PUC, has returned to be our new pastor for outreach and worship coordination. And Roy Ice, who has served as a youth and young adult pastor, is our new campus chaplain.
Prev ArticleNext Article