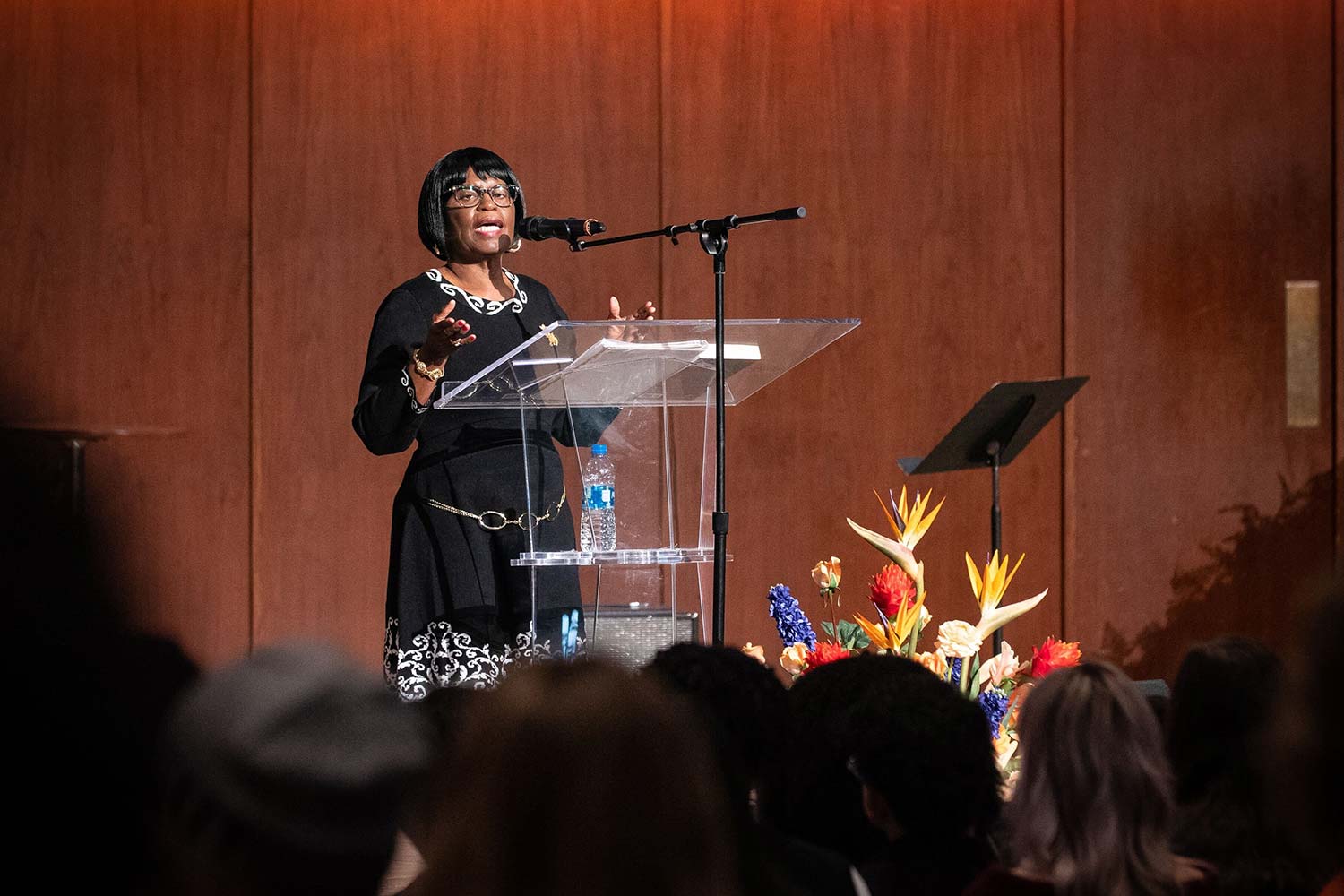 The sisters giggled together as they walked down the avenue to church in their Sunday best. Janie had a new purse, and they tossed it back and forth and laughed some more. Even the gray clouds and autumn wind couldn’t dampen their spirit. It was Youth Day at church, and they would be singing up front in the choir.

Once they arrived, they slipped into the basement ladies’ lounge to freshen up before the program. Janie, the oldest, reminded Addie Mae and Sarah to get to their Sunday school class on time.

Then Denise, Cynthia, and Carole came in and joined their friends. At the wash basin, Denise turned and asked over her shoulder if Addie Mae would tie her dress. The last thing young Sarah saw was her older sister’s hands reaching out for the sash.

Then the room exploded.

With her gentle Southern accent, Rudolph told the students about Birmingham, Alabama, in the 1960s. About the atrocious Jim Crow laws that prohibited nearly every interaction between black and white residents—even children playing together.  About Gov. George Wallace declaring “segregation forever” in front of the state Capitol. About Public Safety Commissioner Bull Conner releasing dogs on a black youth at a demonstration.  About Martin Luther King Jr. speaking and organizing nonviolent protests against racist state and federal laws.

King and other Civil Rights activists and leaders often met at 16th Street Baptist Church— one of the largest black churches in Birmingham—through the spring of 1963. They were met with fierce resistance by many.

On Sept. 15, 1963, four young men from an Alabama chapter of the Ku Klux Klan planted at least 15 sticks of dynamite attached to a timing device in the basement of that same church. Right near the ladies’ lounge, where five girls were getting ready to sing in the choir. At 10:22, it detonated.

Despite the force of the blast, Rudolph stood in the jumble of wreckage around her. But she couldn’t see. First, she called for Jesus, she said. Then her sister.

The Rev. John Cross ran into the now-gaping hole in the basement, scooped Rudolph up in his arms, and took her to the ambulance.

She was badly injured but alive. After the horrific event, Life magazine published a photo of Rudolph lying in a hospital bed with bandages over both eyes. Rudolph’s left eye was eventually removed and replaced with a prosthetic, and doctors removed 26 shards of glass from her face.

But worst of all, Rudolph told PUC students, was the realization that these girls had died in a safe place—in church.

She became nervous and fearful of going places. If a car backfired, she’d jump. She’d shake in church.

Rudolph said her “nervous condition” carried on for many years. She began to use alcohol and drugs to try and calm herself.

Janie, her oldest sister, invited her to her church. Rudolph said she was moved by the pastor’s call to repent, be forgiven, and be baptized.

Later, she said, the pastor called her up on stage to pray for healing for her anxious condition.

Rudolph said after that night, she felt brave enough to be part of church activities up front, including singing in the choir.

“Now,” Rudolph told the PUC students, faculty, and staff, “I can go places. I can talk about Jesus.”

“I had to forgive the men that bombed that church,” she continued. “I carried a lot of hate in my heart for what they did to those girls and myself. So I forgave them and really started to live my life again.”

PUC senior Keren Castro, a photography major, said she thought it was “encouraging” to hear how “Rudolph went through such a traumatic event but was still able to find peace in her heart and forgive those who did this to her.”

“It was a powerful story that really resonated with the students, “ PUC Vice President of Student Life Ryan Smith said. “It’s one thing to read about these types of histories, it’s another to hear it from the person live when you can hear and feel the emotions.”

The 16th Street Baptist Church bombing was among the most high-profile events of the Civil Rights Movement—forcing the United States to reckon with racism. In part, it contributed to Congress finally passing the Civil Rights of 1964.

Carrie White contributed to this story.