“The Best Professor I’ve Ever Had:” Robin Vance Named Educator of the Year 2019 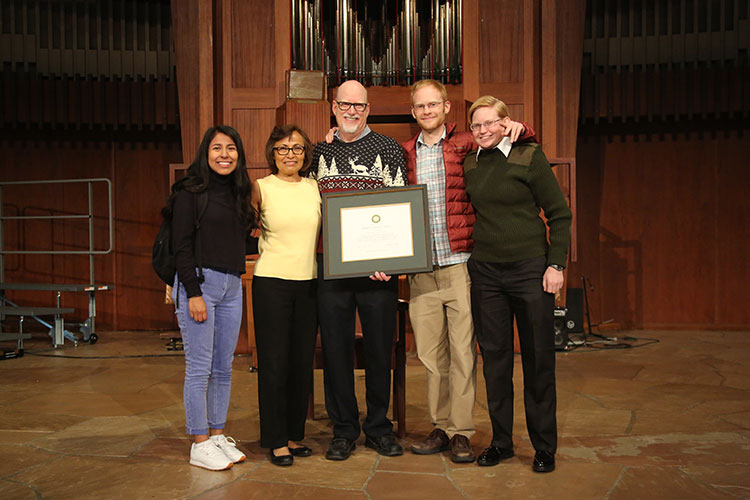 Vance has been teaching at PUC since 2001, when he accepted an offer to join the faculty in the department of biology. Previously, Vance taught for 12 years at Union College in Nebraska, including chairing their Division of Science and Mathematics. He brings with him bachelor’s, master’s, and doctorate degrees from Loma Linda University, and a Ph.D. in physiology.

The EoY is chosen by the students. They vote for professors who have had tremendous impact on their lives. The award is always a surprise when it is announced, and is always received with resounding applause and cheers. During this event, the previous year’s EoY, who this year was Dr. Peter Katz, professor of English, presents a speech, and both colleagues and students of Vance took some time to “roast” the much beloved professor.

“Dr. Vance’s tests are always challenging,” said Jefferson Richards, biology major and pre-med student. “For example, those of you who have taken Systems Physiology have experienced the joy of the infamous multiple multiple choice, where maybe one, or two, or three, or four, or all of the choices are right. Or maybe none of them are.”

Vance’s fellow biology professors Aimee Wyrick and Dr. John Duncan had a few comments of their own, which were received with much laughter from the audience. Stating jokingly that winning Educator of the Year in 2008 was apparently not a fluke, Wyrick added with a grin, “Vance has everyone fooled, though; he’s actually a tyrant who must be appeased with donuts and Coca-Cola.”

Wyrick and Duncan read an acrostic poem they’d written, called “Robin,” keeping with a tradition started in 2018 by the department of English when they presented a “roast” poem for Katz.

“With his sizable reward for winning,” Duncan concluded, “he can now afford to take the department on one of those cruises he’s always telling us about.”

It wasn’t all silly fun and games, however. Vance was awarded EoY for a reason, and that is because he is a stellar professor and advisor, noted by many.

“Dr. Vance equipped us with the knowledge, study tools, and most importantly, self-confidence to believe we could do well in his class, and we can achieve our career goals,” Richards said from the podium. “He is hands down the best professor I have ever had.”

Though he enjoys every class he teaches, Vance says the ones in which he finds the most joy are those during which he can spend a large amount of lab and class time with students. Their education and success are the whole purpose of his career in teaching—where one professor plus one student equals far more than the expected output of two people.

Richards and fellow biology/pre-med student Janet Tang concluded their tribute to Vance with an acknowledgement that there is more to an educator than simply the educating.

“Dr. Vance is a gifted educator,” they said. “However, to describe him as merely an educator would miss who he truly is to students: An advocate, a mentor, a cheerleader, an advisor, and a friend. And when we graduate, we will miss seeing Dr. Vance in his cute Christmas sweater, even if he’s wearing it in March. Thanks, Dr. Vance, for making our time at PUC even better.”