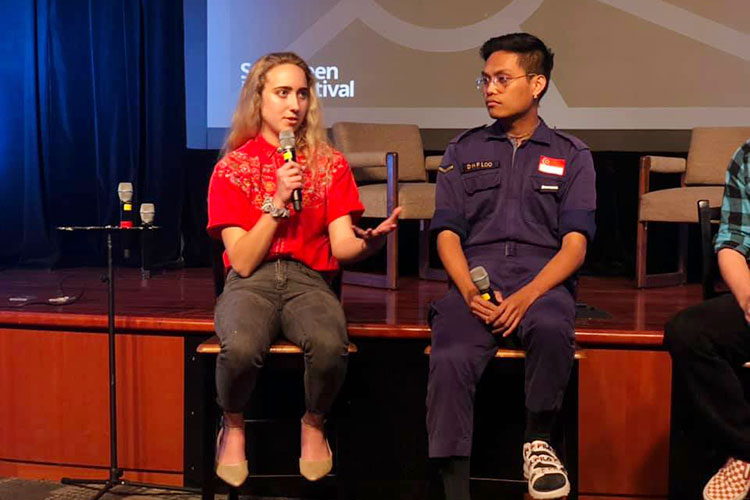 Early the morning of April 4, 38 film students, alumni, and professors from PUC’s department of visual arts packed themselves into a bus and drove to Riverside, Calif., for the annual SONscreen Film Festival. Since its establishment in 2002, this festival gives Christian filmmakers a chance to mingle and showcase their work. Adventist schools around the country gather for the festival, from Walla Walla University in Washington State, to Andrews University in Mich.

“I think overall it was probably the strongest set of films I’ve seen in quite awhile,” says film professor and department chair Rajeev Sigamoney. “I think it was mentioned it’s the highest amount of submissions the festival has ever seen; close to 100.”

Sigamoney feels taking students to SONscreen is a bonding experience, no matter what happens, and it builds a special community between the film students, even across school programs.

“It’s the closest equivalent us filmmakers get to a basketball tournament,” he says with a chuckle, “so whether you win or you lose, I think it’s a good experience. Over the last couple of years we’ve created strong relationships with students from other schools and you get to see them again when you attend each year. It’s a really cool community.”

PUC had thirteen films exhibited at the festival and our students walked away with awards for Best Dramatic Short and tied for Best in Fest, both won by PUC alumni Sarah Martinez for her film Charlie.

“Charlie is an ongoing project that’s been three years in the making, although in many ways you could say I’ve been building up to it since I was little,” says Martinez.

When it came time to pick a project for her senior thesis, there was no doubt in Martinez’s mind that she had to tell her personal story, and she says that being able to utilize her thesis to raise awareness for parents with disabilities has been an incredible journey.

“As an only child, it was often difficult growing up to experience many of the challenges I did completely alone,” she says. “It’s been such a wild experience to find validation in seeing some of my experiences in rooms of varying audiences.”

Martinez says the best part has been people sharing their personal experiences with her, telling her the impact Charlie had on them and what it meant to them; that the intended purpose from the beginning was to give a voice to other children and parents going through similar hardships dealing with disabilities within families.

“Winning Best Dramatic Short and Best In Fest at SONscreen didn’t feel like a win personal to me, or even a success to my journey as a filmmaker or my past. It felt like a win for the entire film program. I can’t wait to continue the journey, make the feature length version of Charlie, and hopefully spread the reach even further to those who don’t have the resources to make their voice heard.”
Moreso than just the win, Sigamoney says the festival was a nice moment that recognized all of the strong films the program has played over the years.

“I think it’s a testament to how hard our seniors work on their thesis projects,” he adds.

Film professor Tim de la Torre wrote, “Our students’ work represented their best work; work which comes from a place of authenticity. Our students have things to say and truly are engaging in the art form at a very high level.”

de la Torre also points out that for those who want a career in the film industry, SONscreen Film Festival is an excellent way to find connections in media ministry or in Hollywood. It is also a time of community and recognition for hard work among the Adventist film community. PUC’s trip to SONscreen 2020 can be expected to be just as rewarding, win or lose, as long as they’re together.