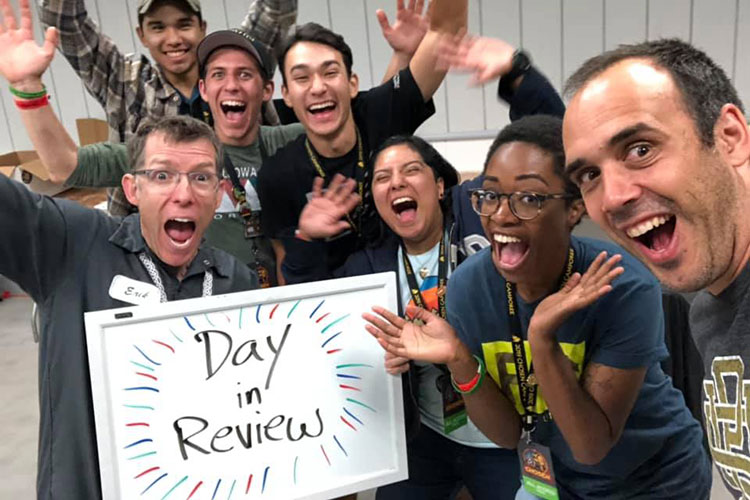 This year’s Pathfinder Camporee at Oshkosh in Wisconsin hosted a film crew from PUC’s own department of visual arts. A group of four students, one alum, and faculty director Tim de la Torre were tasked with creating nine-minute videos to highlight five days of the annual pathfinder meeting, under the direction of Erik Stenbakken from Stenbakken Media. These “Day in Review” videos were displayed every evening, showcasing not only Camporee events and activities, but also the talents of the small film crew on hand.

Sophomore film and television major, Adam Adreveno, helped the team navigate the many challenges that entail when filming among a group of 50,000 people.

“My job was basically to do what needed to be done as quickly as possible. I would go out to film different stories ranging from ‘Camp Life’ to ‘Woohoo: Fun Stuff to Do’ and then edit them together if I had time,” he continued, “I learned how to manage long days and pressure in order to deliver a specific video that needed to be completed by a deadline. Working at the Camporee was like a crash course on how to make good videos quickly.”

Alum Gabriela Talavera mirrored Adreveno’s sentiments about working under constrained timing. She noted, “The tight deadlines were the most challenging. We would start the day at 8 a.m, start editing around 11, and have a deliverable ready by 6:30 in the evening. That's a full video planned, shot, and edited in about 10 hours. Every day.”

While the team’s duties proved unwieldy, de la Torre assembled, in his own words, “a team comprised of individuals who were quick learners, willing to work hard, and work together as a team without egos or complaints.”

He beamed, “I couldn’t be more proud of them and the work they did. Everyone had a voice in the final product and took true ownership of their work.”

PUC’s videography team provided the Oshkosh campers with a creative and professionally polished way to reflect on their time at Camporee. Those interested in seeing what the PUC crew accomplished can access the team’s videos on YouTube.