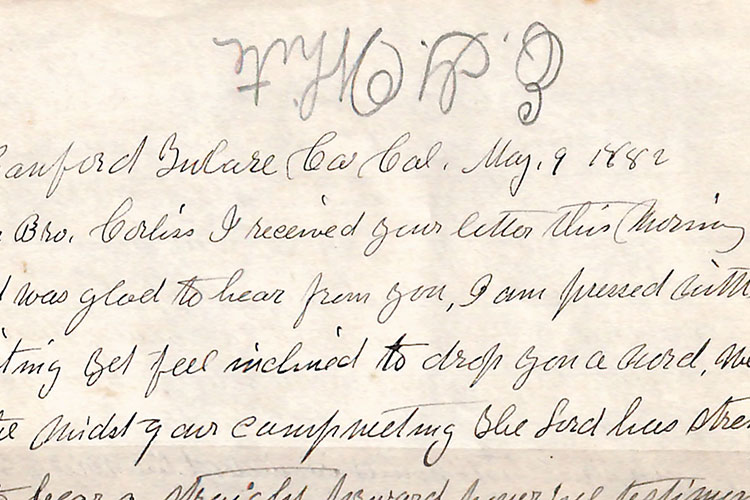 Recently, Pacific Union College’s archivist, Katharine Van Arsdale, found the missing page of a crucial handwritten document, long-thought to be lost. This discovery (or re-discovery) completed an academic detective story many years in the making.

In 2015, Van Arsdale examined what appeared to be a letter from Ellen G. White in a small metal cabinet designed to store maps. She noted the letter (dated 1882) was incomplete and lacked a signature, although someone had written in pencil the author was Mrs. White, co-founder of the Seventh-day Adventist denomination. In January of this year, several scholars examined the document, immediately recognizing the Adventist leader’s distinctive style, penmanship, and spelling.

After fielding questions from denominational archivists and scholars from around the country, Van Arsdale was determined to learn more about the letter. She conducted a thorough inventory of the college’s historical materials and, much to her surprise, found the rest of the letter, complete with signature. The second page of the densely written letter had been separated from the first and stored for years in a different file.

“I was delighted the letter was preserved,” she says, “but mystified by how it was organized.”

According to Van Arsdale, one of her predecessors, Gary Shearer, first found a portion of the letter in 1983. At that time, important historical materials were saved but not systematically classified. Shearer was confident the letter was authentic, though he was unable to get confirmation from the White Estate, Ellen White’s literary executors.

“I am grateful for Shearer’s pioneering work,” says Van Arsdale, who notes the White Estate now considers the letter authentic.

The letter rediscovered by Van Arsdale is a rebuke to hypocrisy and pride, according to Dr. Eric Anderson, director of the Walter C. Utt Center for Adventist History. “It is typical of the ‘testimonies’ Ellen White sent to believers,” he says.

In this particular letter, White wrote to a clergyman named J. O. Corliss: “Bro. Corliss I entreat of you to walk humbly, be willing to be servant of all. Become patient, meek, pure, and simple as a child. Put away everything like pomposity and self-exaltation.” She expressed a concern (apparently shared by Corliss) many ministers showed “growing unbelief in the testimonies of the Spirit of God.”

Nine years ago, Pacific Union College made a commitment to historical discovery and preservation.  “In 2010, we decided to build a center for Adventist history, named in honor of long-time history teacher Walter C. Utt—and amazing things have been happening ever since,” according to Cushman.

The new wing of the college’s Nelson Memorial Library, which is in the process of being built, will help make sure important historical documents, photographs, and artifacts are not lost and will also contain a “high-tech” conference center for the discussion of the history of civil rights (and dedicated to PUC administrators and professors Percy and John Christian).

A display featuring the newly discovered letter, among other related artifacts from the PUC archives, is available for viewing in the Maxwell Reading Room of the Nelson Memorial Library. For library hours, visit puc.edu/library. For additional information about the letter itself, contact Van Arsdale at kvanarsdale@puc.edu.

See a scan of the original document

Honorary Doctorates in Philanthropy to Bob and Evalyn Trinchero