From Vineyards to Skydiving: Aviation Grad Climbs to Managing His Own Fleet 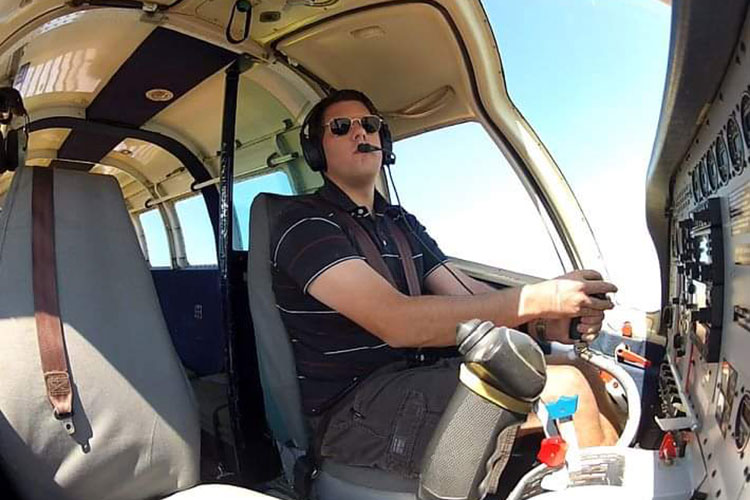 As a kid, Rick Harter watched Top Gun for the first time and decided then and there he wanted to fly.

“Without hesitation, my dad told me I absolutely could become a pilot someday,” Harter recalls. “He told me if I worked hard, I could fly around in jets when I grew up and I thought that was so awesome!”

Over the next several years, Harter attended all the air shows he could find, and never lost his love for aviation. He decided being a missionary pilot was the path he wanted to follow, so he headed to Pacific Union College to study.

“I really enjoyed the challenge of flying into that little airport,” Harter says. “That field is a bit more challenging than other airports where some students learn to fly. PUC aviation grads have a bit of an edge when they get their license, because they have experience landing on a short airstrip surrounded by hills.”

He also says he appreciated the mentorship of Nathan Tasker, flight director during Harter’s time as a student.

“He was so positive all the time,” Harter recalls. “He taught me a lot about character, and about being a safe pilot. Lessons I will continue to use throughout my career.”

Harter began working as a pilot long before graduation; as a student, Harter flew for clients in the Napa Valley, doing vineyard imaging. He also helped with flight instruction for PUC, and his very first job was fueling PUC’s planes and helping run the flight center.

“I got flight hours any way I could,” says Harter. “One of the biggest challenges of a new aviation grad is getting the number of flight hours that make them hirable by the most desirable companies.”

After four years of building lifelong friendships through study groups and late-night burritos while playing pool in the dorm, Harter graduated in 2008 with a B.S. in aviation. He headed south where he started freelance flight instruction and supplemented as a skydive instructor before being invited to serve as chief pilot in the company’s new starting drop zone. After three years as chief pilot, Harter’s wife, Aimee, received her residency assignment in Reno, Nevada.

It just so happened that a former PUC classmate of his living in Reno had accepted a job in Southern California, opening a position for Harter.

“Flying for the small charter company gave me the opportunity to try different types of flying,” he says. This included Medevac, for which he flew as captain for three and a half years. It was during this time Harter had one of the most memorable experiences he’s had as a pilot thus far.

Dispatched to an emergency call about 30 minutes out, Harter and his crew took off into a clear night sky. They were surprised to find themselves a few short minutes later in blizzard conditions. As Harter began the approach he still had very low visibility and couldn’t see the airport. Finally spotting it, he found the runway completely covered in blowing snow with a gusting crosswind.

“We slid 45 degrees and the nose wheel was on solid ice,” Harter remembers. “In an effort to stop, I threw both engines into reverse pitch thrust, another way to brake. It sort of worked, but it also blew even more snow into my windshield, making it impossible to see.”

The plane was careening 100 miles per hour down an icy runway and Harter couldn’t see a thing. He came out of reverse, let the windshield clear, checked his surroundings, and went back into reverse thrust. Alternating between the two several times, Harter was finally able to bring the plane to a stop so they could pick up their patient.

“I never want to do that again, but at least it was a learning experience,” Harter says with a laugh.

While flying Medevac, Harter was also still helping to manage the skydive airplanes at his classmate’s former company. When the owner had to move out of state, he offered Harter the opportunity to take over the company full time. Harter accepted and he now manages five jump aircraft and does regular pilot checks to ensure his crew is fit to fly.

Each part of his career has brought new aspects to enjoy. In flight instructing he enjoyed the lightbulb coming on, the moment the students have that ‘aha!’ moment. Dropping skydivers was fun; the people he transported were really enjoying themselves, and he had to climb to the appropriate drop altitude as quickly as possible.

“And of course, flying Medevac was great because I was helping people and saving lives,” he says. “You get to push your boundaries and personal limitations and you get really good at learning to fly in all weather, developing your IMC skills—instrument meteorological conditions.”

Currently Harter is enjoying tackling the challenges of running a business, including managing a small fleet of aircrafts and employees, finding cost-effective and timely solutions to problems, and handle a budget.

“That learning curve has been steep,” he admits, “but I’ll get it. And then I’ll move on to the next challenge.”