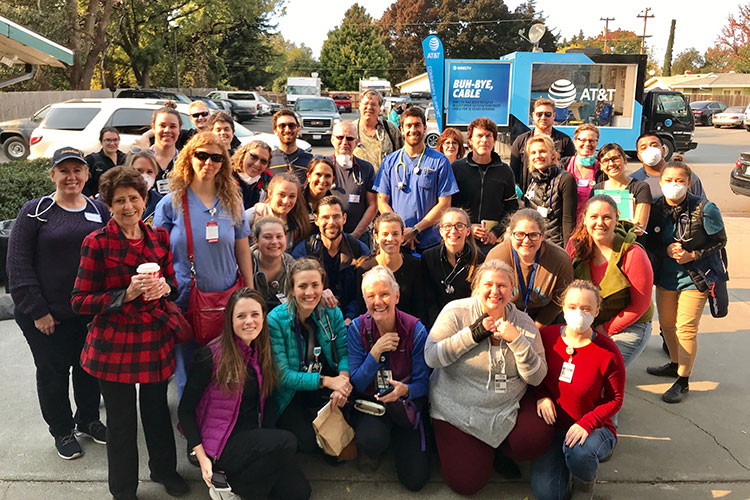 On Thursday, Nov. 8, the Camp Fire, what is being billed as perhaps the most devastating fire in the state’s history, began ravaging Paradise, California. That same day, the East Avenue Church in Chico opened its doors to evacuees.

“I arrived at the shelter on Friday afternoon, looking for a way to help,” says PUC alumna Kallie Griffin, who is now a pre-med student at California State University Chico. “I noticed a woman walking around in scrubs, so I introduced myself and asked how I could help.”

As Griffin does not yet have any medical certifications, she was given the role of organizing and helping to lead the church-turned-shelter-turned-clinic. Over the ensuing four weeks, the church sheltered over 200 evacuees, most of them elderly, as Paradise has a high population of senior citizens.

“We created a way of charting patients and ordering prescriptions with a Google Document, then created a way for us to internally communicate through walkie-talkies and a group chat,” Griffin explains. “As the days progressed, we were able to get more and more medical volunteers and were soon running a 24/7 clinic out of a gymnasium behind the church.”

The clinic/shelter quickly grew to include six military tents, portable showers and toilets, three meals every day, heaps of donations, and, according to Griffin, “the most incredible volunteers,” some of whom traveled from out of state to help.

After a few days, Griffin received a message from Fabio Maia, service and missions coordinator at PUC. During her time at PUC, Griffin had spent a year as a student missionary in Fiji, and Maia had been her volunteer director. Seeing on Facebook what Griffin was doing at the clinic, Maia wanted to know how the college could help. On advice from Griffin, Maia rounded up half a dozen EMTs/paramedics and organized sending them to the Chico clinic/shelter where Griffin was volunteering.

Griffin explains, understandably, the most difficult shift to fill at the clinic was the overnight shift. The PUC team offered to work that shift for three nights during their Thanksgiving break, then crashed each morning on the gym floor of the Chico SDA Church to catch a few hours of sleep before beginning again.

Kenzie Hardy, current Student Association president at PUC, was among those who volunteered at the clinic. She was part of a team in charge of making sure the midnight-6 a.m. shift ran smoothly, providing medical attention or assistance to those at the shelter.

“I accompanied some of the EMS students on their rounds of the complex,” she explains. “Since I don’t have any medical training, I assisted in other ways, such as helping some of the elderly people there get safely from their wheelchair to the restroom and back, sanitizing the common areas and walkie-talkies, and replacing some makeshift supply shelving with metal shelving units.”

Hardy says the experience was an eye-opening and inspiring one. Shortly after their first night shift started, the heater inside the gym stopped working and it became quite cold, though it remained significantly warmer than outside. This brought to Hardy’s mind those who are staying in makeshift camps, in tents on top of cold cement without much to use as covers.

“At the end of the shift I returned to my car and put the heater on, but some would have to stay in this living situation for much longer than a night,” she says. “The road to recovery, and rebuilding is not a short or easy one.”

While serving at the clinic, Hardy was also able to interact with several people who had been there volunteering for multiple days. One in particular, a nurse who had helped set up the clinic, had lost her own home in the fire.

“She did not stop to dwell on her own loss, but started giving back the community members who needed this clinic,” Hardy says. “Despite her loss and long work hours, she was smiling and joking the whole time. I think that is what true community is about; realizing there will always be others who need help, and helping each other represents sacrifice.”

Though the East Avenue Church shelter/clinic officially closed on Friday, Dec. 7, the need is still great. As a majority of the clinic’s patients are elderly, many require assisted living, have chronic illnesses, and will continue to need medical attention in the future.

“Monetary and gift card donations are welcome, of course, but right now we desperately need social worker volunteers to assist evacuees in their next steps,” says Griffin.

PUC’s SA leaders have taken this need seriously, and have adapted several of their pre-planned student events this quarter to benefit those who are most affected by the Camp Fire. During their SA colloquy, they held a raffle for various prizes and provided extra tickets to students who brought gift cards for the fire victims.

“We vowed to match up to $1,000 of the gift card donations from our SA budget,” Hardy explains.

The SA ugly Christmas sweater ice skating event required a $5 entrance fee, of which 100 percent was given to fire victims. Some students gave additional donations on top of the entrance fee.

“We are in contact with Pastor Ron Zimmer from the East Avenue Church to give away the gift cards and cash donations to those who need it most,” says Hardy.

For information on how you can help with current needs, contact any of the SA officers or reach out to the PUC church. Hardy can be reached at knhardy@puc.edu; the church office is available at church@puc.eduor (707) 965-7297.