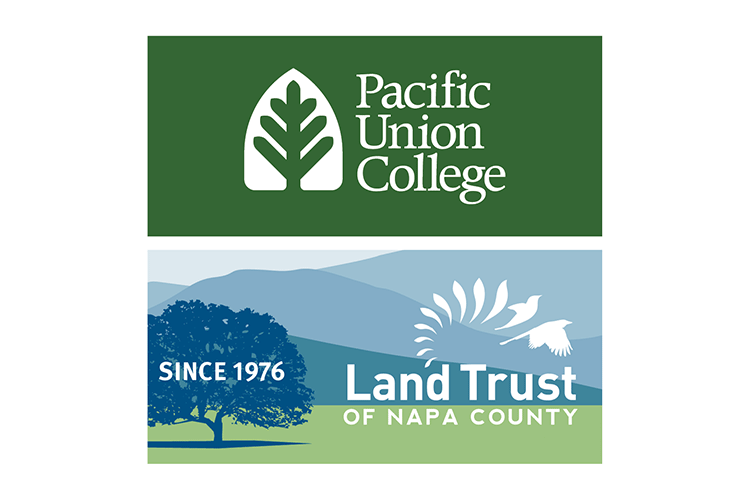 ANGWIN, California – Pacific Union College (PUC), the Land Trust of Napa County (LTNC), and CALFIRE are pleased to announce the permanent protection of 864 acres of priority forest land in Angwin, California. Working together, on Dec. 20 they closed a conservation easement (CE) on land currently owned by PUC. The forest will continue to belong to the college, but the easement will permanently eliminate the potential for residential, commercial, and agricultural development of the property.

The PUC forest has been used by students, faculty, and the community for over 100 years, and the college wants to maintain and manage this use in the future. With this CE, the college will be able to ensure ongoing use of the forest for research, classes, and student projects.

“PUC’s forest abuts both the 800-acre Las Posadas State Forest, and a Land Trust property,” explains Peter Lecourt, forest manager for the college. “This easement will create over 1,750 acres of contiguous protected land.”

In recent years, PUC had considered selling their forest lands to generate funds to support their primary mission: education. The college changed course when it learned about the option of working with LTNC, the Wildlife Conservation Board, and CALFIRE to sell a CE on those lands under the state’s Forest Legacy Program.

PUC’s Board of Trustees chose the CE option to generate the much-needed funds while still maintaining the legacy of the forest. The process also generated a clear management plan for the PUC forest, approved by the state, and a new focus for the college on their responsibility to manage the forest for long-term benefits for both the college and the community.

“The PUC forest easement is a critical Forest Legacy project,” says Stewart McMorrow, CALFIRE deputy chief of forestry assistance. “We are protecting an important forest from the possible conversion to non-forest uses, and that is incredibly important for not only the college and the community, but for the local ecosystem as well.”

LTNC and PUC have been working on this CE project for over four years to garner the state grants and private donations needed to complete the acquisition. During that time the college has made major investments in professional forestry assistance to manage the forest in a sustainable and fire-safe manner. The college is also raising private funds and applying for state and federal grants to manage the forest in a way that will help meet these goals.

The $7.1 million the college received at the closing of this CE was a bargain sale with the college forgoing over $1.5 million in appraised value to assure that this CE, which requires the forest to be maintained as forestland forever, could be accomplished.

“The PUC demonstration and experimental forest is an integral part of the educational and student life experiences at Pacific Union College,” says Bob Cushman, PUC president. “I am very pleased to see this forest preserved and managed in perpetuity.”

Based on the successful outcome of these efforts, PUC’s board and administration is working with LTNC and other partners to add an additional 250+ acres of forestlands into conservation over the next few years.

In addition, the college is raising funds and working with state and federal partners to complete nearly three miles of shaded fuel break along the top of a major ridge in the forest between Pope Valley and the community of Angwin. This defense structure will aid our firefighting community to stop any major fire heading toward Angwin from the drier areas in Pope Valley. Fire history shows this has happened in the past and has potential to occur again.

The responsibility of tying the legacy of the forest to the college’s education programs was given to Lecourt, PUC’s first ever forest manager to oversee college lands. Lecourt has been instrumental in seeing the CE through to completion and coordinating efforts between the various organizations and entities involved. The college is also working with two registered professional foresters on operations, including retired Forest Service forester John Henshaw.

“The forest belonging to Pacific Union College has long been known as one of the most significant natural areas in Napa,” says Henshaw.

PUC’s land includes a number of rare native species of plants, including perhaps the best example anywhere of Napa False Indigo. It is also a crossroads for two important wildlife migration corridors, and is a nesting habitat for the threatened Northern Spotted Owl.

“The completion of the conservation easement on the PUC forest is an important step toward achieving one of our primary goals: creating a continuous corridor of protected land along the entire length of the eastern ridge above Napa Valley,” explains Doug Parker, CEO of LTNC.

The most interior—that is, farthest from the coast—redwoods in the entire range of the species are found in eastern Napa County, and the PUC forest includes some of these stands.

The easement will also help protect Moore Creek, which runs through the property, one of the key streams flowing into Lake Hennessey, the main source of water for the City of Napa.

PUC would like to thank LTNC, CALFIRE, and the Wildlife Conservation Board for their encouragement, professional assistance, and funding to take this project to completion. They would also like to thank the private donors through LTNC who considered this project important enough to invest their time and financial support to make it happen.

“I want to thank the California Wildlife Conservation Board and CALFIRE for their commitments to this project,” says Parker. “Without their help, this easement would never have happened. In addition, it would not have been possible without the commitment from PUC to accept a price significantly below appraised value. We very much appreciate PUC’s commitment to the permanent conservation of this beautiful forest.”

A community-wide celebration of the Conservation easement will take place in spring 2019; an announcement with details will be made closer to that time.

If you wish to support the PUC forest conservation and fire mitigation project, visit puc.fund/firemitigation. All donations are tax deductible.
Prev ArticleNext Article