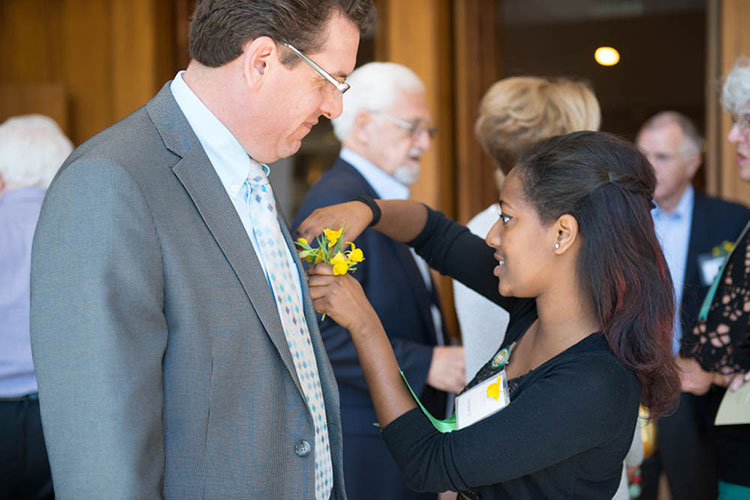 Pacific Union College alumni were welcomed back to campus for the college’s annual Homecoming Weekend during the beautiful weekend of April 15-17. “Welcoming our alumni family back to the PUC campus is the highlight of our year. It’s such a blessing to see old friends and make new ones,” shares Mark Ishikawa, associate vice president for advancement and strategic partnerships.

The festivities began with the second annual PUC Talks on Friday afternoon. This series of mini lectures is modeled after the popular TED Talks. This year’s featured speakers were Katy Van Arsdale, archivist and special collections librarian for the Nelson Memorial Library and the Walter C. Utt Center for Adventist History at PUC; Dr. Stanley Sturges, a 2016 Honored Alumni and a graduate of the class of 1950; and Dr. Floyd Hayes, a professor in PUC’s department of biology since 2003.

Friday evening, a banquet was held in the Dining Commons in recognition of the 2016 Honored Alumni. The program began with special music by the PUC Octet, under the direction of Dr. William Chunestudy, associate academic dean.

President Heather J. Knight recognized each honoree’s extraordinary service to “leave these sacred grounds and go forth to make a difference and really have an impact on the world.” Knight explained the awards were given in the areas of the “Four Pillars of Ministry”: Mission and service ministry; educational ministry; church ministry; and health ministry.

Following the banquet, alums attended In Memoriam, a service celebrating the lives of PUC women and men who passed away during the past year, followed by Pioneers Vespers. President Knight welcomed the congregation and Manny Mora, class of ’16, and Whitney Weems, class of ’17, led out in the annual singing of the school song, Our College on the Mountain. The PUC Octet provided special music.

Pastor Samantha Angeles Peralta, class of ’13, was the evening’s featured speaker. Angeles Peralta currently serves as the associate pastor for youth, young adults, and worship ministries at Bonita Valley Adventist Church in San Diego. Her talk, “Because of William,” challenged listeners to take the risk to trust Christ and live as we do. “For each of us, God has a special call to be a pioneer … to open the way and break ground to lead others to Him.”

Sabbath morning, Honored Alumnus Elder Charles White presented “Ellen White Through the Eyes of Her Great Grandson,” where he shared stories and insights into the lives of the famed Adventist pioneers. For over 40 years, he has served as senior pastor at multiple churches, and has been involved in missions and ministries around the world.

The Sabbath sermon, “Welcome Home,” was presented by world-renowned vocal artist, pastor, and education activist Wintley Phipps. Mr. Phipps has traveled the globe for close to 30 years, singing and preaching messages of hope to thousands of people, and currently serves as the senior pastor for the Palm Bay Seventh-day Adventist Church in Palm Bay, Fla. He reminded the congregation of the ultimate Homecoming, when we are welcomed home in heaven and inherit the kingdom God has prepared for us. He also commended the PUC legacy. “I believe the true greatness of PUC is not determined by its ability to produce scientists and doctors … lawyers or engineers … the true greatness of PUC in the eyes of God is determined by its ability to produce men and women of Christ-like character.”

Following the alumni luncheon, the afternoon included a full schedule of events for alumni and guests to attend. The Wilmer C. Hansen Museum was open for viewing, as was the student art exhibit at the Rasmussen Art Gallery. A ribbon cutting was held for the Herbert Ford Pitcairn Islands Study Center, and honored Herbert Ford, class of ’54, for his exemplary work in making the center a reality.

The annual gathering of the Friends of Walter C. Utt met in the Rasmussen Art Gallery to remember the beloved history professor who taught at PUC from 1951 to 1985. Several of Utt’s former students shared memories of the professor. Also on display were Utt’s extensive collection of posters and comics, which significantly comprised of Soviet propaganda. The department of music held their annual homecoming concert featuring the I Cantori chorale, the symphonic wind ensemble, the string quartet, and the handbell choir. Closing the Sabbath, Wintley Phipps shared his vocal talent in concert, blessing the many alumni and community members in attendance.

In the evening, many alumni dispersed for individual parties celebrating the honor classes. This year, the graduating classes of ’50, ’66, ’76, and ’86 were honored. There were also alumni games for women’s and men’s basketball.