PUC Students Called to be the Salt of the World 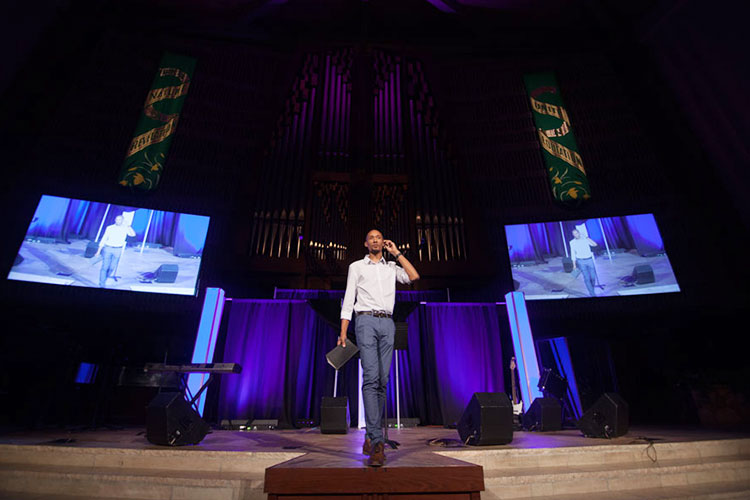 Students participated in six services throughout the week, with a powerful Colloquy program on Thursday morning. PUC’s student praise band lead out the week’s colloquial service with, “What a Beautiful Name,” the theme song for the week. As the song came to an end, Campus Chaplain Jonathan Henderson introduced speaker Jason Francis, who serves as the associate pastor at the Ephesus Seventh-day Adventist Church in Columbus, Ohio.

Francis stepped on stage with an energetic vibe and a smile on his face. He began his sermon with the words, “God wants to turn something that is ordinary into something extraordinary,” a statement that echoes the theme of Fall Revival. “I’m glad he reminded us that God has the power to do that,” said Angel Hernandez, head resident assistant for Newton Hall.

Francis asked students to open their Bibles to Matthew 5:13, the memory verse his sermon was based upon. It reads, “You are the salt of the earth. But if the salt loses its saltiness, how can it be made salty again? It is no longer good for anything, except to be thrown out and trampled underfoot.” Francis exclaimed the students at PUC are the salt of the world, an appeal for students to accept they have the potential to be used as God's instruments for change.

Francis’ message resonated with students, some of whom began to nod, while others said, “Amen!” Immediately, he began to break down the message behind the line, “Salt of the world,” so students could better understand its meaning. He states, “Salt transforms its surroundings, it is not transformed by its surroundings.” Maria Matos, a senior studying occupational therapy said, “I never read that text in the way he explained it. But he described it in a way that contained so much power.”

He concluded his message with a challenge for students. “I challenge you to accept the call of God to be on his A team and to be the salt of the earth.”