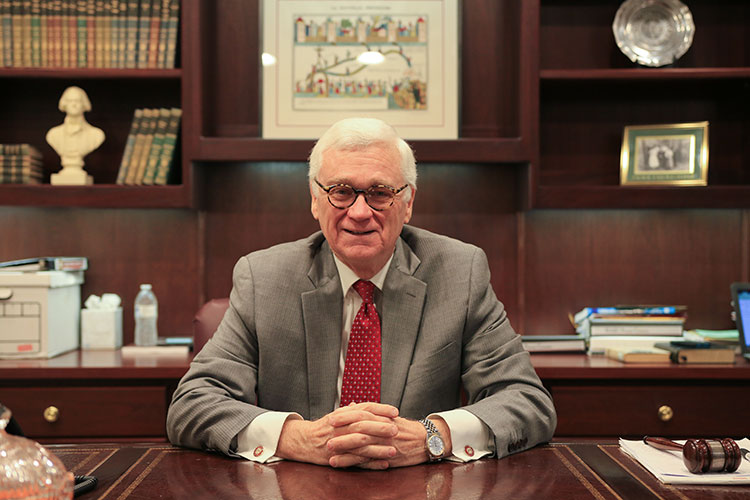 During a special session on December 13, 2016, the Pacific Union College Board of Trustees elected a new president, Eric Anderson, a senior faculty member, to serve until June 30, 2017. Anderson’s six-month appointment begins January 9, 2017.

“I am grateful to Dr. Anderson for agreeing to take on this important leadership role,” says Board Chairman Bradford Newton. “He has the experience, vision, and commitment to lead PUC during the upcoming search committee process.”

According to Newton, Anderson will be asked to help in the process of finding a long-term president for the 134-year old liberal arts college. With the administrative team, he will also be expected to reshape the college budget.

Currently the Walter C. Utt Professor of History at PUC, previously Anderson was president of Southwestern Adventist University in Keene, Texas, from 2005 to 2014, where he served one of the longer presidential tenures in the university’s history.

Dr. Amy Rosenthal, academic dean at Southwestern, says, “It was a privilege to begin my administrative career under Dr. Anderson's leadership at Southwestern Adventist University, where he combined an expectation of academic excellence with a clear vision for the future of Adventist education.” Rosenthal also taught at PUC in the department of history with Anderson prior to her appointment at Southwestern.

“Eric Anderson was one of the nicest things ever to happen to Southwestern. He had a clear academic vision, he made hard choices, and made friends across the campus and in the community. PUC is lucky to get him as president, but we had him first,” says Dr. Judy Myers Laue, professor and chair of the department of English at Southwestern.

Anderson also has a rich history with PUC. He is the fourth generation of his family to teach at PUC, and has devoted 30 years of his life to teaching at the college on subjects such as Christian history and political studies. In 1912, Anderson’s grandmother, Agnes Caviness, was PUC’s first baccalaureate graduate.

“Dr. Anderson’s experience as a top-rate scholar, award-winning professor, and nearly a decade as an administrator uniquely qualify him to lead PUC at this time,” says Dr. Paul McGraw, who has taught in PUC’s department of history since 2000, several of those years alongside Anderson.

“I am confident about the future of PUC,” says Anderson. He praises President Heather Knight, who will leave office on January 8, for her “unflagging optimism and strong commitment to PUC’s distinctive mission.” He adds, “I want to build on her achievements.” He is particularly interested in promoting collaboration between the college and the wider Napa Valley community. With a touch of hyperbole, he says, “We can’t live in monastic isolation up on Howell Mountain.”

Anderson holds a Ph.D. in history from the University of Chicago. In addition to 30 years of teaching at PUC and nine years of administration at Southwestern Adventist University, he has been a Fulbright lecturer in Greece and a program officer at the National Endowment for the Humanities. He has written on a variety of historical topics, including Reconstruction in North Carolina, philanthropic support of black education, and Progressive Era vice reform. His most recent publication is a chapter in the Oxford University Press study of Ellen Harmon White: American Prophet. He and his wife, Loretta, currently reside in Angwin, Calif.

A Tribute to Leadership at Pacific Union College