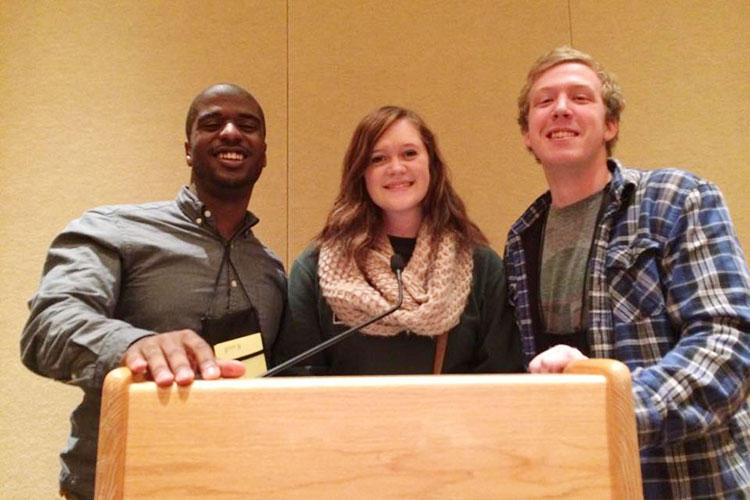 The three English majors submitted papers to the English honors society earlier in the school year. About 30 to 40 percent of the total submissions were accepted to the student conference, during which process each piece underwent review by several experienced readers, usually college professors. Those whose work was accepted to the conference then had the option to travel to the international convention to present the piece in front of a specialized panel. Rankin-Brown mentioned that in the eight years she’s been at PUC, no one from PUC has attended the conference. This year, the PUC delegates represented not only the college, but also Sigma Tau Delta’s Western region, as the West Coast had the fewest attendees to this year’s conference.

In addition to the students’ presentations, the PUC representatives were recognized at the conference award ceremony and received a commemorative plaque congratulating the PUC Alpha Delta Delta chapter for its 20-year anniversary. Rankin-Brown was one of the founding officers of the PUC chapter. “It’s wonderful to see that students still have an opportunity to have their scholarship and work be recognized and commended in such an important way,” stated Rankin-Brown.

Each of the students who presented at the conference said that the experience was both interesting and informative to them as writers. “The most interesting part of the conference for me was getting to interact with other members of Sigma Tau Delta who had written about a similar topic as me during my presentation session,” said Helms, who presented an academic essay on the origins of evil in Beowulf and Strange Case of Dr. Jekyll and Mr. Hyde. Moore, who shared a short story for his panel, stated that after hearing students from large universities present, “it was a nice surprise, knowing that [PUC is] producing academic and creative works that are just as good as the top universities around the country.” Péan mentioned that his classes at PUC had equipped him with the ability to be able to present his short story to a scholarly audience. “The trip definitely was an important experience for me as a writer,” he said. “I got the opportunity to stand up for my work and present it before complete strangers.”

Rankin-Brown expressed admiration for the level of professionalism and talent exhibited by the PUC students’ presentations. “Carlo’s story had the most interesting point on his panel,” she expressed. “Laura’s paper was very unique in its argument, and Daniel got the most (intentional) laughs for his short story. All in all, they did an amazing job.” However, the presentations weren’t the only opportunities the students had to learn more about the larger writing community; they had the chance to attend sessions on academic and creative writing, network with other young writers and mentors, and participate in an exchange of ideas.

Rankin-Brown explained that both collegial and outside support was crucial in getting these three students to attend the conference. “Given the level of support we got from donors (both on and off campus) who… felt it was a valuable experience for students to attend this conference, I certainly hope that it becomes a regular occurrence for them,” Rankin-Brown expressed. “Having their work shared and discussed and enjoyed by other students and academics is an experience that contributes to personal and professional growth and is just rewarding, overall.”