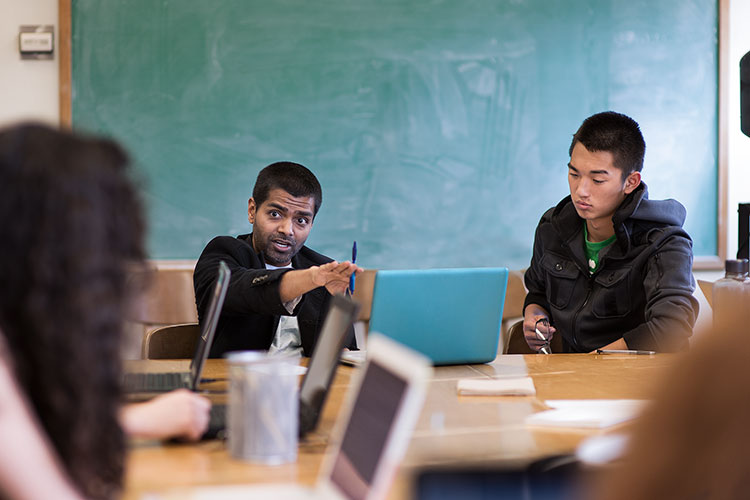 On Valentine’s weekend, the film Old Fashioned opens in theaters nationwide. The independent film is an inspiring look at dating and relationships, focusing on developing grace-filled, lifetime love. Viewers can choose to see Old Fashioned instead of the Fifty Shades of Grey adaptation opening the same weekend in part thanks to the creative collaboration of PUC film professor Rajeev Sigamoney.

Sigamoney has been a member of the PUC faculty since 2012, but his friendship with Old Fashioned director, writer, and lead actor Rik Swartzwelder goes back much longer. “The first film set I ever visited back in Maryland was a short film Rick was shooting,” explains Sigamoney. The two grew closer after Sigamoney, who started his career as an engineer, moved to Los Angeles in 2002. They began meeting each week to discuss films, faith, and the challenges of working in the film industry as artists and as Christians.

Sigamoney is listed as a co-producer on Old Fashioned because of the core role he played in the creative development of the script and edit of the film. “I first read a draft of Old Fashioned in 2003,” Sigamoney describes. Over the next decade, Sigamoney gave notes on multiple revisions script and connected Swartzwelder with studio contacts he had made as a producer and writer of the film Jesus People (which can be viewed via iTunes and Amazon). “I was probably going to be a larger part of the shoot of the movie, but unfortunately it was the summer I got married. The suit that Rick wore as my groomsman is actually the suit he wears at the end of the movie,” laughs Sigamoney (wife Brittnie works in PUC’s department of communication). He and his fellow co-producers also gave input on the cut, or edit, of the movie.

“A filmmaker wants to surround himself with a certain core group of people who have either been around from the beginning or are his most trusted people,” says Sigamoney of his co-producer credit. The same collaborative relationship Sigamoney developed Swartzwelder is one he encourages within the film program at PUC, which has seen continual growth since the program—which now offers associate, bachelor’s, and bachelor’s of fine arts degrees—was introduced as part of the department of visual arts. Even as the program has grown and offered more classes, it has remained small enough that students are able to find their niche and blossom as filmmakers. Students work together on film projects in multiple classes, developing a variety of skills while learning how to work together, an important lesson in field that requires high levels of teamwork.

Sigamoney also encourages his students to put passion above profits or acclaim. “You can’t just do a project and then cut yourself off from it,” he comments. “Whether The Record Keeper or Jesus People or any of the other projects I’ve been involved with, you have to love it and stand behind it. … I try to get them to look at ‘What’s that meaningful to you that you’re willing to work on it even if no one were ever to see it but you and a core group of people?’”

At the end of January, a group of four students travelled with Sigamoney to the Sundance Film Festival in Park City, Utah, as part of the Windrider Forum organized in part by Fuller Theological Seminary that included Q&A sessions with directors of festival films about themes of spirituality. They were also able to attend a Faith in Film panel that included DeVon Franklin, a Seventh-day Adventist film producer. “Sundance really pushes people to be thoughtful in a lot of ways,” Sigamoney says. “Being around a group of smart, spiritual people helps students experience a larger community of art and faith that I want them to be a part of after they leave PUC.”

PUC students are around peers who understand their artistic side and their spiritual side in the offices, labs, and classrooms of the film program, and also experience greater Christian community at events like Sundance, the SONscreen Film Festival (where Sigamoney won the $10,000 Pitchfest prize in 2013), and the Biola Media Conference. They also attend events closer to home, including the Napa Valley Film Festival and San Francisco International Film Festival. “This is a very challenging industry … and at these festivals, students are able to network and talk to people that could offer them internships for their films,” Sigamoney explains.

While working on his own projects as a writer and filmmaker and seeing Old Fashioned make it to the big screen brings satisfaction, “teaching comes first,” Sigamoney confirms. “I do genuinely receive the greatest joy from teaching.”