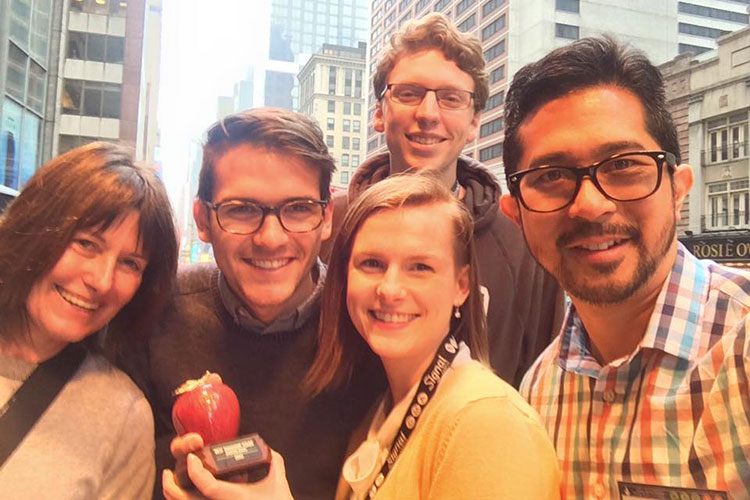 In the midst of dead week, a group of PUC faculty and students had the opportunity to attend the College Media Association Spring Convention in New York City on March 11-14. Milbert Mariano, chair of the department visual arts, and Lynne Thew and Brittnie Sigamoney, both instructors in the department of communication, travelled to New York with Mark Soderblom, Student Association video producer, and David O’Hair, editor-in-chief of the Campus Chronicle. At the convention, the college won two awards for design for campus publications.

The College Media Association convention was attended by more than 1,200 attendees and had 250 general sessions, along with special events and an awards ceremony. “It was good to see what the universities are producing and compare how we stack up,” shared O’Hair.

In addition to lectures, keynotes, and workshops, the convention also offered tours, with behind the scenes stops at Bloomberg, Sports Illustrated, Entertainment Weekly, and CNN. During their free time, the group had a chance to visit popular tourist destinations such as Times Square, the Natural History Museum, and Central Park.

“It was one of the best opportunities I’ve ever had to connect and network with people who are leading the world of publications,” O’Hair said. “It showed me that PUC students can excel in any industry.”

The College Media Association hosts two annual conventions that serves thousands of students and advisers with education, research, and resources. It gives members the opportunity to gain quick advice from colleagues and discuss news and issues affecting collegiate media.