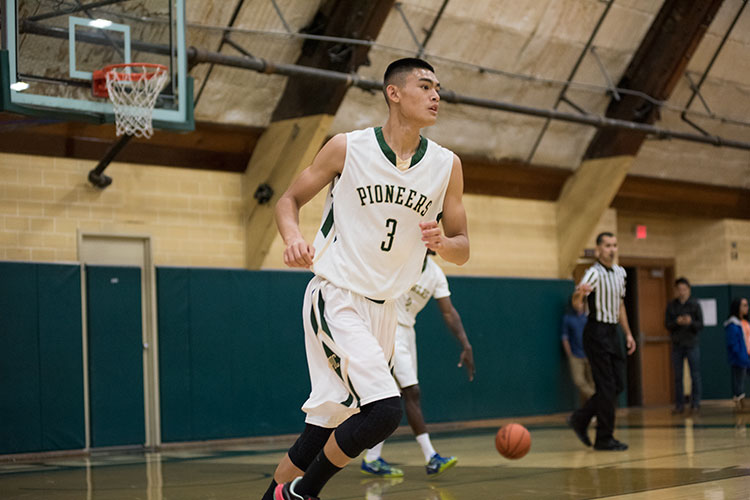 The Pioneers, having already locked in a playoff spot, looked to improve their record against the UC Merced Bobcats. The Pioneers came out of the gate running and were able to make the seniors’ last home game memorable with an 85-58 senior night win. This win improves their record to 11-16 and their conference record to 6-4.

Austin Coetzee, last year’s team manager turned basketball player for the Pioneers 2014-2015 campaign, has been “a great example of what it means to make sacrifices, to be humble, honest, and always displays great sportsmanship,“ Coach Greg Rahn states. “He is very much about the goals and success of the team and a strong supporter of those around him.”

This was Devon Marshall’s first year with the Pioneers. He is third in team scoring during conference play with nine points per game, second in assists with 17, and second in blocks with five. Rahn states, "He has shown positive personal growth and has developed a ‘glass-half-full’ attitude."

Jordan Monteith also played his first year with the Pioneers and was nominated for the Daktronics-NAIA Scholar-Athlete Award and the Champions of Character Individual Award. He also earned Cal Pac Player of the Week honors earlier this season. Coach Rahn says, "He is a living example of a student athlete, great in the classroom and on the court."

Keith Hicks is another first year player who has been nominated for the Champions of Character Individual Award. "He is full of positive energy and excitement with a great work ethic to match," says Rahn.

Gurpreet Sangha is a second year Pioneer who currently ranks third in school history in career three pointers (80). He was selected as player of the week earlier in the season after scoring 23 points and connecting on 4 three pointers. "He has a great work ethic in the classroom and on the court. He is the definition of a team player,” says Coach Rahn.

Taureaus Maxwell is playing his third season with the Pioneers. He has come back from a broken ankle that he suffered in his sophomore season to become a better player than ever. He currently ranks second in school history for most rebounds in a game with 17.

Jordan Greenwell has served as a team captain in his two years as a PUC student athlete. He was a member of the Cal Pac conference first team in his junior season and holds the record for most assists in a game with 11. He ranks third all-time in points per game with 12.86 and is the only player in school history to record a triple double.

This year has been a year of firsts and records for the men's basketball team that couldn't have been achieved without the seniors. Coach Rahn says, "It truly is a blessing to be a part of the history these gentlemen have made this year and the lessons we have learned along the way. Thank you PUC! Thank you seniors! You have all made me very proud!"

The men's basketball team will take on number two seed Simpson University at the Cal Pac tournament with hopes of going to the NAIA National Championships. They will play at Cal State University Maritime on Saturday, February 24 at 8:30 p.m.