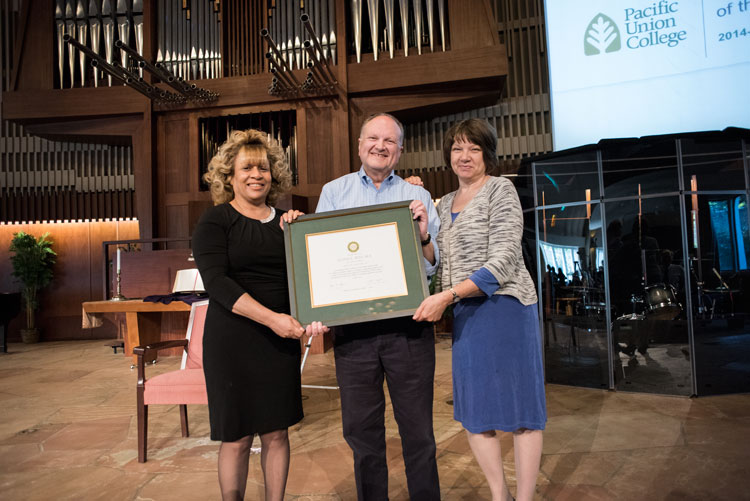 The first Colloquy Speaker Series of spring quarter introduced Lloyd Best, M.A., associate professor of mathematics, as the Pacific Union College 2015 Educator of the Year. During the April 2 presentation in the PUC Church Sanctuary, students, staff, faculty, and administration celebrated excellence in teaching and honored the over 30 years Best has served PUC and its students.

Best, who specializes in math education, joined the faculty of PUC's department of mathematics in 1988, and served as department chair from 1988-1996. Later, he served as chair of the departments of computer science, mathematics, and physics from 2004-2012. Before becoming a part of the math department, Best worked as the director of the Educational Computer Facility at PUC from 1978-79. The educator is known for his kindness and patience, skills he honed teaching math and science at several Seventh-day Adventist academies for 14 years and as a principal for three years.

The Educator of the Year is an award given entirely by student vote, and the identity of each year’s recipient is a highly kept secret. Professor of Business John Nunes, Ph.D., last year’s titleholder, gave a short speech before revealing the recipient of the 2015 award. “You have brought so much joy and meaning to my life,” Nunes told the students. “I’m so happy to be a part of your lives. You inspire me to be a better person and better teacher.”

Nunes then invited Best—“one of the nicest fellows on the planet”—to the platform to receive the award as the students applauded the popular professor. The traditional roast was begun with a picture slideshow narrated by Best’s wife, Jennifer Wareham Best, director of the Teaching and Learning Center. She playfully teased Best, while also providing insight into his life before he became a professor at PUC. She also included photos of Best enjoying hiking in Europe, cheering for the San Francisco Giants, and spending time with family.

Sophomore biomathematics major Taleah Tyrell was the first to share her praise of Best. Tyrell described the educator as “fluent in both the universal languages of math and teaching.” She added that he “is willing to go above and beyond what [professors] have to do.” Jonathon Gregory, senior mathematics major described Best as even-tempered, patient, and willing to question, challenge, and understand his students.

Steve Waters, himself a recipient of the Educator of the Year award, closed the program in honor of his mathematics colleague. “Every class he takes on, he will make it the best class he can,” Waters, department chair, said. He concluded, “We finally have a best Educator of the Year.”