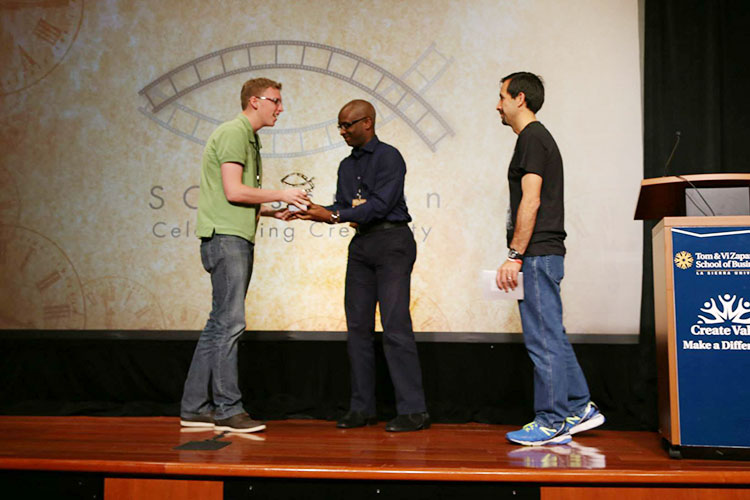 A group of Pacific Union College students enrolled in the Film & Television program traveled to La Sierra University in Riverside, Calif., for the annual SONscreen Film Festival on April 2-4, 2015. Students stayed busy by attending workshops, viewing film screenings, and meeting talented students from other Adventist colleges and universities as well as industry professionals. At the awards ceremony that wrapped up the festival, PUC’s own Mark Soderblom won the Jury Selection Award for his film The Pilot.

PUC represented the largest group attending the festival with a total of 30 students. The 2015 SONscreen not only had keynote lectures and film screenings, but a mini-movie challenge as well. The students had a strict two-hour time limit to shoot and edit a film in teams. Featured speakers included Rik Swartzswelder, director and costar of Old Fashioned, and Jason Sutterland, director of The Record Keeper. In addition to the lectures, the professionals also held Q&A sessions with the students.

Winning the Jury Selection Award was an “exciting moment for PUC,” said Soderblom, a sophomore. Soderblom’s documentary, shot entirely on his iPhone, is a showcases his brother and fellow PUC student Bryan Soderblom. Like many other students, Bryan was unsure of the future and choosing a major. Mark explained that his brother, “let go of external guidance” and chose to do what he loved: flying.

Each year, the Jury Selection award is given to a film that is the embodiment of the festival. After the experience, Soderblom explained he walked away with more than an award. “If you can connect your audience with a character and make them feel, you succeeded,” he realized.

Since 2002, the SONscreen Film Festival has been the premier annual gathering for Christian young adults who have a passion for using film and video to create productions for social awareness, outreach, and uplifting creative entertainment. SONscreen was created by the North American Division of Seventh-day Adventists to nurture Christian filmmakers in their craft, career development, and spiritual lives.