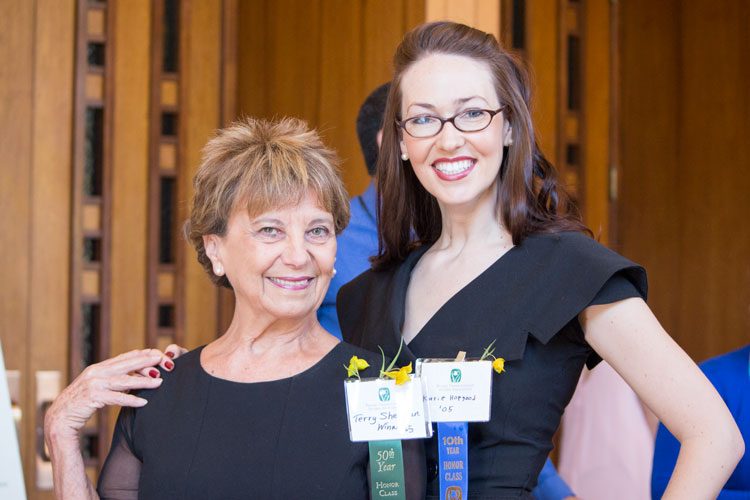 Pacific Union College’s alumni family numbers over 26,000 people, and each individual makes an important impact in their own community. Each year, Honored Alumni awards are given to graduates who demonstrate the best of this Pioneer Spirit. Though they finished their college experience in different generations, each Honored Alumnus had something central in common: a passion for answering God’s call to be a light in the world.

On April 17 to 19, 2015, alumni and friends of Pacific Union College gathered at “Our College on the Mountain” in Angwin, Calif., for a special and unique Homecoming Weekend recognizing the trails of service blazed by the many dedicated graduates of Pacific Union College. During a weekend full of special events, eight individuals were recognized for their exemplary service with Honored Alumni and Honored Pioneer awards at a Friday evening dinner in their honor.

The 2015 Honored Pioneer recipient was Adu Worku, M.A., M.S.L.S. Worku received the award, which is given to a non-graduate for exceptional service to the college, in recognition of his exceptional dedication to the power and freedom of education. The director of library services at PUC since 1985, Worku’s path to the Nelson Memorial Library began in northwest Ethiopia, where his parents taught him an agrarian life. It took a freak accident to break the cycle of illiteracy for Worku. Determined to learn, he completed eighth grade at the age of 22 and high school at the age of 26. He now holds two master’s degrees from Andrews University and a master of library science from the University of Southern California.

A community leader, talented musician, poet, and author, Worku enriches our appreciation for Christian education like none other. Worku has also gifted that transformational education to others. The Worku-Jenber School in his home village in Ethiopia now educates thousands of boys and girls, providing them access to brighter futures because of this Pioneer’s generosity and determination.

In addition to the Honored Pioneer award, PUC recognized seven alumni for their outstanding accomplishments and service.

The first recipient of this year’s Pioneer Award was recognized for authoritative understanding of history’s challenges and intricacies. Stanley Payne, Ph.D., ’55, is a respected historian, prolific author, and the leading scholar on the study of modern Spain and European fascism. Inspired by beloved Professor of History Walter C. Utt, Ph.D., Payne pursued the life of the academic and received his doctorate at Columbia University. He has published over 30 books, countless articles, and retired as Professor Emeritus at Wisconsin Madison in 2005.

Jerold Beeve, M.D., ’61, and his wife Dorothy (Dunscombe) Beeve, R.N., ’63 were honored together for generously bringing clear sight to those in darkness. ““God works miracles,” Jerry Beeve said as he accepted the award. “He puts the right people in the right places when you need them.” The Beeves have been the right people for tens of thousands of people living in Fiji who were unable to work, care for their families, or receive an education because of problems with their vision. Since 1990, this gifted ophthalmologist and first-class nurse and organizer have touched the lives of the residents of an island nation they first visited on their 25th wedding anniversary. They’ve performed over 2,000 surgeries, provided 27,000 eye exams, and distributed more than 26,000 pairs of glasses. The Beeves have dedicated their time, resources, and expertise through the Beeve Foundation for World Eye and Health, an organization they founded in 1990. They’ll next head to Fiji in August with a group of equally passionate volunteers they’ve recruited.

Judith (Olson) Aitken, R.N., ’65, is an inspiring example of the Gospel in action. The PUC nursing graduate has a heart to help the people of Southeast Asia in all walks of life know God and experience His grace and love. She first worked as a nurse on the border of Thailand and Cambodia, and then with an evangelistic and medical organization called Projects Asia. She later worked as the refugee coordinator for Adventist Frontier Missions. Judy credits the Lord’s miraculous leadings for beginnings of Adventist Southeast Asia Projects Ministry (ASAP), which she founded in 1995. Through the Lord's many blessings, ASAP continues to support the spread of the gospel in Cambodia, Vietnam, Laos, Thailand and Myanmar.

Aitken “accepted [the Honored Alumni Award on behalf of all who have dedicated their lives to honoring God,” as PUC President Heather J. Knight, Ph.D., presented her with the Honored Alumna award in recognition of passionate ministry to the mind and spirit.

As Norman Low, ’76, and Carolyn (Lai) Low, R.N., ’74, received the Honored Alumni Award, they shared how they were inspired by Christ’s ministry to both the physical and spiritual needs of others, often around food or meals. The Lows follow Christ’s example while caring for others in their community, Norman as a gynecologist and fertility specialist and Carolyn as a nurse and administrator. While the care they provide as medical professionals changes lives daily, they take their service to others further through generosity, friendship, and a home cooked meal as the organizers of Home Lunches, a program of the PUC Church. The Lows open their St. Helena home at least once a month, welcoming up to 100 PUC students. With taste, culinary talent, and listening ears, they have fed and supported thousands of college students who are far from their own family table.

The final Honored Alumni recipient was James Appel, M.D., who also spoke later in the evening for Vespers. Appel attended PUC in 1994-1995, later graduating from Southern Adventist University and Loma Linda University School of Medicine. Now, he serves the medical needs of people living in remote and dangerous areas of Africa, displaying remarkable courage and compassion as he provides healing to those in desperate need of care. Currently working on new healthcare projects in rural Chad with his family, Appel most recently served a Cooper Adventist Hospital in Monrovia, Liberia in the midst of the Ebola outbreak, braving exposure to provide healthcare and hope.

A weekend full of more opportunities to recognize the spirit of service and compassion found in the PUC family followed the Honored Alumni and Pioneer dinner. Sabbath morning, David Trim, director of archives, statistics, and research at the General Conference, led a Sabbath School program about the origins of Adventism in California, Pacific Union College’s history, and the first missionaries to Asia. The Sabbath sermon was given by Jon Dybdahl, Ph.D., ’65, who was the recipient of the Honored Alumnus award in 2005.

A highlight in the afternoon was the groundbreaking of the Library Phase II project, a multi-million dollar renovation that will include the Walter C. Utt Center for Adventist History and Research & Media Center. By the end of 2016, the Center will provide a twenty-first century space for research by Adventist scholars and Pacific Union College students. Saturday evening was also full, with a concert by the Wedgwood Trio and a retirement party for longtime business professor Lary Taylor among the many other events.