From PUC to NBC: Alumna Joanne Park Speaks for Colloquy 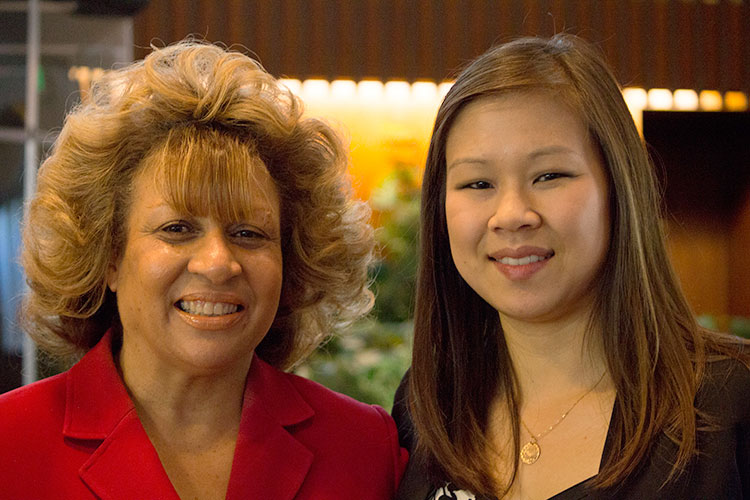 On May 29, Pacific Union College hosted Joanne Park for one of the Colloquy Speakers Series’ final installments of the school year. Park graduated from PUC in 2000 and is currently the Senior Director for Digital and Daytime Publicity at NBC Entertainment. She shared her career journey at NBC and also offered advice to students about what they can expect as they leave college and enter the workforce.

After graduating from PUC, Park worked in the page program at NBC at the Tonight Show with Jay Leno and gave tours of the NBC Studios in Burbank, Calif. Soon after, she was invited to join the corporate production events team, where she produced events for advertisers, NBC affiliates, and various primetime television shows.

Park has spent the last 11 years in the entertainment publicity department, working on campaigns for hit shows including ER, Fear Factor, The Office, Parks and Recreation, The Golden Globes, The Biggest Loser, and The Blacklist. Park currently oversees digital and daytime publicity for her department and her responsibilities include all social media campaigns for all NBC primetime shows, publicizing all digital initiatives for nbc.com, as well as working on marketing and publicity strategy for the head of the digital department.

However, Park explained that her road to a glamorous job at NBC did not come easy. Park admitted to growing up with demanding Asian-American parents who wanted their children to become doctors, lawyers, or engineers. Defying these stereotypes, Park knew at a young age that her dream job was to work at NBC.

Park credits her success to her hard work, a quality her sixth grade teacher recognized. “She had used the word tenacious to describe me, and it stuck ever since,” said Park. “It fit well because although I may not have had the smarts, I made up for it through hard work.”

In her presentation, Park continued to emphasize the theme of hard work. She reminded students that there are no shortcuts in life, and that most college graduates have to start from the bottom and work their way up to prove their worth. She also emphasized that students of this generation are not entitled to anything, and that graduates must make themselves stand out through résumés and interviews to be noticed. Park concluded by encouraging students to make their dreams a reality through hard work and persistence.