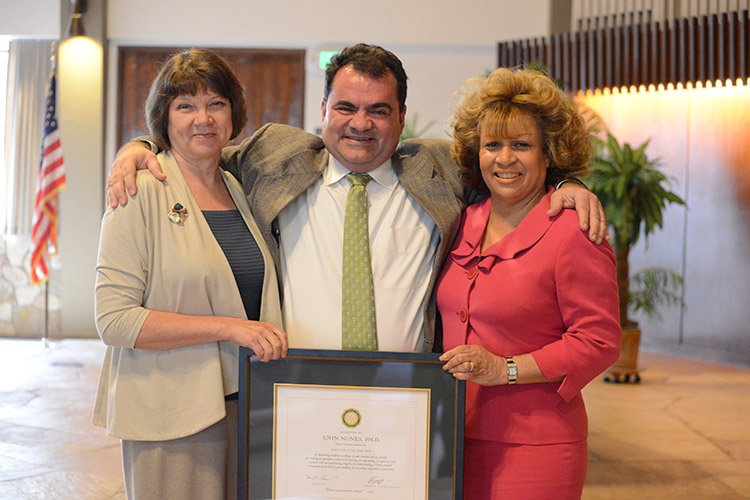 John Nunes, Ph.D., associate professor of business administration, was named the Pacific Union College 2014 Educator of the Year at a special Colloquy program dedicated to honoring the college’s excellent faculty and highlighting the important work happening each day as teachers and students interact in the classroom.

Nunes was elected the Educator of the Year entirely by student vote, and this year marked the highest participation in student voting since the award began in 1984 at 50 percent student body participation. Nunes joined the PUC faculty in 2011 after over 25 years building and leading teams in sales, operations, and general management roles for privately-held and Fortune 500 companies. He specializes in leadership, management, strategy, and behavioral economics, and serves the students of PUC as not only a teacher, but as a mentor as well.

After a short speech by the 2013 Educator of the Year, Asher Raboy, the identity of the 2014 honoree was revealed. Nunes made his way to the church platform to the cheers and applause of the student body and his faculty peers. Department of business chair Rodney Hardcastle was the first to step to the microphone. Hardcastle described Nunes as the Energizer Bunny because of his “keep going” attitude. “No one deserves the award more, because of your energy, friendship, and enthusiasm in the classroom,” Hardcastle said.

Professor of History Paul McGraw, a classmate of Nunes’ at Shenandoah Valley Academy, recalled memories made when Nunes was his Resident Assistant at the boarding school, including times when Nunes would stick up for McGraw and his mischievous friends. “Nunes will struggle to help you get through anything,” stated McGraw.

After a translation of “Nunes-speak,” Nunes’ catch-phrases and “colorful colloquialisms,” by his department of business colleague Keith Neergaard, senior business major Nithi Narasappa stepped to the stage to praise Nunes for his ability to be an authentic leader and inspiration to his students. “An authentic leader is one who inspires, encourages, and pushes individuals,” said Narasappa. “Nunes makes you feel capable of anything, and amazing is not a good enough word to describe him.” Narasappa’s classmate Danitza Meneses, a fellow senior, echoed her thoughts: “He meets us where we’re at and works with us individually until we meet our highest potential,” she said.

“There are too many good things to say about him, beginning with his positive relationships with students, faculty, and God,” said fellow department of business faculty Lary Taylor, himself a three-time recipient of the Educator of the Year Award. “It was only a matter of time before [Nunes] got this award.”