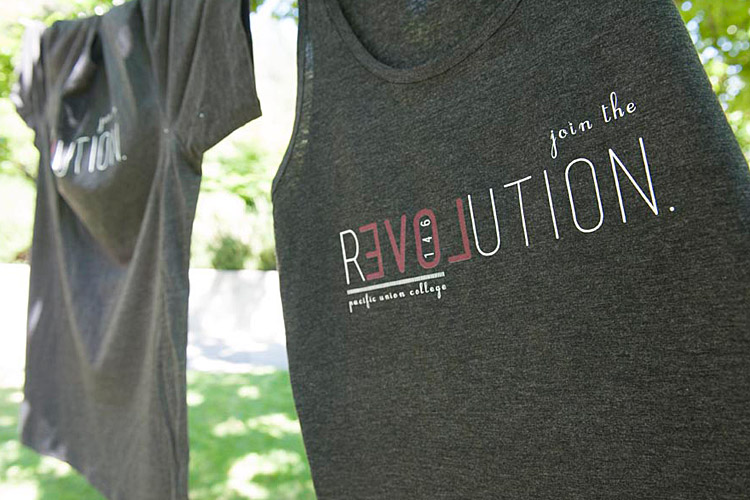 The last and largest REVO event of the year took place Sunday, May 19. The day’s festivities included a rummage sale, a live benefit concert, and a fashion show.

REVO, a student-led philanthropic movement, first came to PUC in the spring of 2008. Each year since, students have chosen a different organization to team up with in support of a worthy cause. This year, all proceeds of REVO-related events went to Love146, an organization working to abolish child sex-trafficking and exploitation, while also providing aftercare to victims.

Senior nursing student Brittney Foldvary was involved with this year’s event by overseeing publicity about REVO’s charity. “I love children and believe strongly in the protection of their vulnerabilities,” said Foldvary, “so knowing that I could be a small part of contributing to the lives of these children by providing information about these issues was extremely rewarding.”

One significant addition to this year’s setup was Spring Fest. Traditionally, Spring Fest is held in the gymnasium on a different weekend than REVO, but this year the two were combined outdoors. According to REVO’s student leader Kristianne Ocampo, the idea was first proposed to benefit both events.

Because Spring Fest is generally less popular than Fall Fest, Ocampo thought this would be a good way to increase attendance. Rather than holding it in the hot gymnasium in the middle of spring, she thought combining both events outdoors may make them both more desirable to students.

Club booths were set up along the Campus Mall, while the lawn and the fountain served as the stage for the concert and fashion show. Campus clubs sold food, beverages, and more, and many of the booths opted to donate 20 percent of their profits to the REVO cause.

This year’s benefit concert featured Michael Alvarado and Carissa Rae—the husband and wife duet Us. Soon after the sun had set, the fashion show began. The runway, constructed over the fountain, displayed fashion lines both designed and modeled by PUC students. Two teams of designers were crowned winners: Jamie Wittwer and Grace Otieno received the People’s Choice award for their superhero-themed line and Jaryn Hart and Manuel Peralta’s Star Wars-themed line was awarded first place by the judges.

Events held throughout the year include a student art show and a 5k color run. Although numbers are still coming in, an early estimate shows that approximately $8,000 has been raised for Love146 by this year’s REVO efforts.

“What I especially love about REVO is that it is completely student-run and student-led,” Ocampo commented. “It serves as an instrument through which students can make a difference in the hurting communities around the world—to be a part of something much greater than themselves.