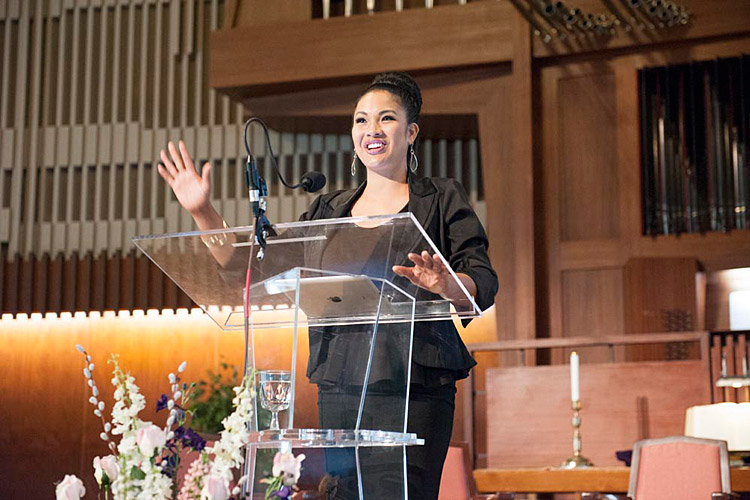 Grey was crowned Miss America in 2001, as Miss Hawaii. She made history by becoming the first and only Asian-American to hold the position. Grey was also the first teacher to earn the title, as an elementary school physical education teacher. During her year as Miss America, her platform was “Character Education.”

Grey grew up in Hawaii. Her family moved to America from the Philippines in 1970. “Like so many others, they were trying to achieve the American dream,” she said.

Thinking back to her childhood, Grey remembered feeling excluded because she was different. “It wasn’t long before I began to look for way to make a space for myself in the world that was mine alone,” she remembered. “Eventually I was able to come to terms and embrace my multiple identities—as an American, a Filipina, a Catholic girl raised in Hawaii, and the eighth of 10 children who was often referred to by number rather than name.”

She consciously recognized that she didn’t look like the women in the Miss America pageant, or even other women in magazines and on television. “But time, maturity, and faith helped me see that my physical difference didn’t make me less attractive or less of a person—it made me special,” she said.

At age 18, she entered her first beauty pageant. After 6 years, she took what she saw as her last chance: the Miss Oahu pageant. She placed first runner-up and she came to a realization. “I knew then that my goal wasn’t just to win the title or a new identity,” Grey recalled, “but it was to win the platform from which I could show myself as a role model.”

Grey briefly explained the rules one must abide by to compete in the Miss America pageant, including the since-abolished seventh rule: “Contestant must be in good health and of the white race.” Though the rule was repealed in 1970, Grey reflected on all the beautiful women who had previously been excluded.

“I’m proud to have in some small way helped to broaden the American ideal of what beauty can be,” she said.

As Grey reflected on her journey both as an Asian-American and a Christian, she recalled something her mother told her: “Angie, if you obey God and you do His will, your life will be better than a fairytale.” Even after earning the crown, Grey continued to hold to her values, making sure to attend church every week while on the road.

“I encourage every single one of you here today to seek your own place in the world and follow your hearts and God’s will into a life of wonder that can ultimately be better than a fairytale,” she said. “My life has thus far been a journey of faith, family, dreaming big, heartbreak, grand success, doubt, joy, and ultimately making peace with the story no matter how the plot has twisted.”

In encouraging the audience to stay dedicated to their dreams and faith in God, she closed with the following statement: “One person can make a difference, but together as a collective whole we can change the world.”