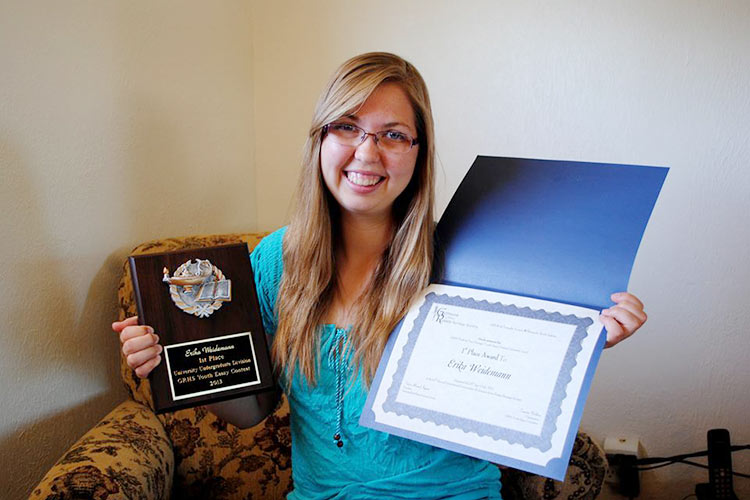 Senior history major Erika Weidemann grew up listening to her grandmother’s stories of her childhood as a German refugee in Europe. During her junior year at PUC, Weidemann, a dedicated scholarship-hunter, ran across an essay contest sponsored by the Germans from Russia Heritage Society. The winning essay would be printed in the society’s publication, and the author would receive a $1000 scholarship. During Christmas break, Weidemann submitted an essay to the international contest. While the academic paper included historical facts about the life of German refugees after World War II, it also became a way for Weidemann to share her grandmother’s experiences with the rest of the world. Her essay snagged first place in the contest, to the delight of Weidemann, her peers, and her professors in the department of history.

Weidemann believes one of the key factors in winning the contest was the human element of her essay. Instead of a purely biographical publication, she was able to convey real-life stories of how her grandmother was affected by the war and relocation. A child’s perspective of the evacuation upped the interest level of the essay. “It was also the combination of historical accuracy with a creative writing element,” says Weidemann.

One of the more interesting things Weidemann discovered during her research was the resilience of the German culture in the Soviet Union. Even though the German refugees were immersed in a completely different culture, they hung on to the majority of their traditions and culture. In the midst of a foreign land, they were still Germans at heart; this was the setting in which Weidemann’s grandmother grew up.

Since winning the contest, Weidemann has been in contact with the editor of the Russia Heritage Society’s publication, the Heritage Review, in which her award-winning essay has appeared. She admits that while she wasn’t really knowledgeable about the topic of Germans in Russia before starting this project, after winning the contest she was extremely well-versed in their history and heritage. Weidemann plans to pursue this interest as she prepares her senior thesis and applies to graduate school. The connections she has forged, especially at PUC, have already helped her along the way. She gives credit to the department of history for preparing her to write this essay and giving her the tools to be successful in later education. One of the best parts of winning, she said, was hearing how proud her teachers were of her success.  In her pursuit of a graduate degree, Weidemann states that this essay could be fodder for a later dissertation. “It’s been a lot more than just winning scholarship money,” she says.