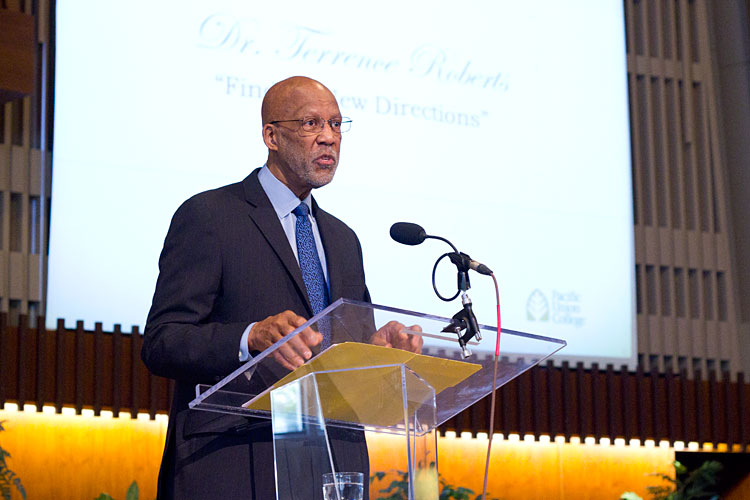 The celebration of Black History Month at Pacific Union College began with a civil rights pioneer sharing his experiences from the era. Congressional Gold Medalist Terrence Roberts, one of the iconic Little Rock Nine, spoke to the gathered PUC students, faculty, and staff on February 7. Roberts was a member of PUC's faculty in the mid 1970s.

To his PUC audience, Roberts spoke about his motivation and participation in the journey toward civil rights. While still in high school in 1957, he became one of the Little Rock Nine when he and eight other African-American students put their lives on the line to integrate Little Rock Central High School in Arkansas. In 1999, Roberts received the Congressional Gold Medal from President Bill Clinton for his part in this remarkable moment in U.S. history.

Roberts reminisced about life in Little Rock as a teenager — noting that people had had hundreds of years to develop an expertise in discrimination: "For 335 years, it was legal and constitutional to discriminate against people based on racial group memberships," he said. "Discrimination seemed to be second nature to white people in Little Rock."

For Roberts and his young friends who became "the nine," it wasn't about making a revolutionary change in their world. At that point in their lives, the motivation was simple: "We simply wanted to go to school, that's all," Roberts recounted.

The nine black students who enrolled at Little Rock Central High were to begin the school's desegregation process, as supported by the United States Supreme Court's Brown Decision. "The Brown Decision was a bold step towards changing the narrative," Roberts noted, "but such a change was truly not welcomed by the masses."

"Since we purport to be a society based on the rule of law, it was necessary from the start to create an illusion of obedience [to the decision] in those regions outside the area we call the deep south...we knew what they were going to do," Roberts explained.

Over 100 congressmen signed the Southern Manifesto detailing plans to prevent implementation of the Brown Decision. Meanwhile, in response to the students' actions, the governor of Arkansas called for armed resistance. Roberts called the situation "bizarre" but "not so unusual when you know the history [of America]—not an aberration, when you understand the dynamics of racism."

For Roberts, that momentous experience was the beginning of a life work. Since the ultimately successful effort to desegregate the high school, Roberts has been a strong voice at the forefront of the Civil Rights Movement. He spoke about lessons he has carried with him from those early experiences, and noted areas in contemporary American life in which improvement is still necessary.

"The lessons I've learned in Little Rock taught me to be ever alert to the nuances of life in these United States," he said. One interesting instance is the concept of racial color blindness. "I've had to ferret out the reasons so many of us believe in this notion of color blindness," he said. "When I first heard about it, I was rightly skeptical. Why, I wondered, would anyone voluntarily disable him or herself? Why would you not see some payoff in seeing me as the black person I am?"

Then, Roberts said, the answer dawned on him: "The so-called color-blind person could cover me with a veil of whiteness to make me an acceptable human being. The white colorless norm could be preserved while rendering the real me invisible. In a way, this reminds me of the practices in apartheid South Africa."

Finally, noting the disparity in education and other measures of success affecting African Americans in the United States, Roberts asserted that "the real question facing us today is not why there are so many people of color who don't prosper, who don't flourish or bloom to their full potential. The real question is, why are there so many who do?"