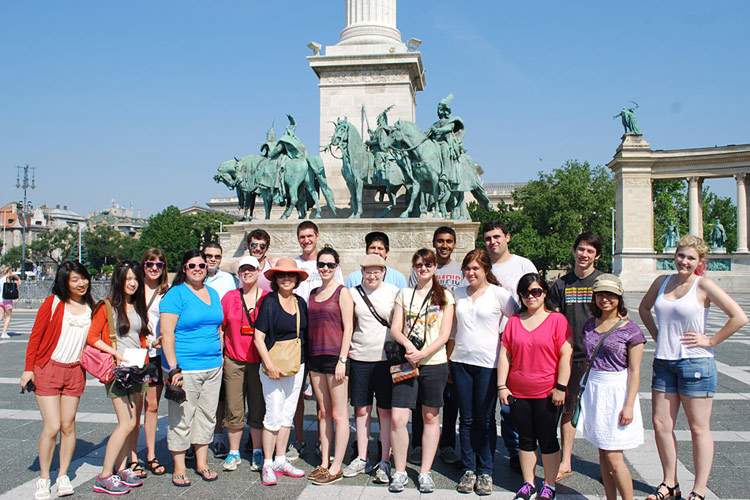 Perched above the Danube River on a Hungarian bridge barely a week after spring quarter finals had concluded, 20 PUC history students were back in class. Their 10-day tour of Eastern Europe, coordinated by the PUC history department, spanned Budapest, Hungary; Slovakia; Krakow, Poland; and Prague, Czech Republic.

"This trip brought to life things that I had learned through my coursework,” says Hollie Macomber, history club president and president of the class of 2013. Led by history faculty Dr. Hilary Dickerson and Professor Ileana Douglas, and joined by biology professor Aimee Wyrick, this year’s tour focused on World War II in Europe and the Cold War era.

The tour is a graduation requirement for history majors, and past tours include Australia and New Zealand (2012), Japan (2010), and England and the U.S.’s East Coast (2008); the course includes a research paper, five book reviews, and a journal of the sites visited. “The tour pursues the learning experience in historical locations and is an enrichment element to our academic curriculum,” says Douglas. During the 2013 spring quarter, students took two upper-division courses in Eastern European history, covering the causes and results of World War II, to prepare for their education abroad. Once there, the realities of war and the atrocities against humanity became evident.

Mornings began with breakfast and a guided tour of the city until lunch, followed by a site-specific tour. Afterward, participants set their own agenda, meeting over dinner in the evenings. Most travel details such as airfare, transportation, hotels, most meals and some tours were arranged by EF Educational Tours, a student travel company contracted for the trip. To keep costs low, the trip took place in summer, when tuition is half price; students could borrow textbooks from the history department’s library; and some scholarships were available through donations to the history department.

“Wait a minute, I’m in Europe!” was the reaction of many students as they strolled the city streets, says Douglas. After the day’s tours ended, the group members kept going, whether exploring the city, shopping, attending concerts, or eating gelato, an intensely flavored Italian ice cream popular throughout Europe.

The trip also offered many sobering lessons in the harsh effects of human cruelty. At Auschwitz, the infamous German concentration camp in Poland, the group stood beside piles of shoes discarded by Jews on their way to the gas chambers. On the streets of Budapest, many buildings ravaged in World War II remained unrestored, looking as if the war had ended only recently. Reconstruction can cost millions of dollars. As they experienced being in these places firsthand, the realities of war touched each one of the participants in the tour.

“Students saw the ugly side of humanity—but it doesn’t have to be that way. We can act for good,” noted Douglas. For instance, students learned about Oskar Schindler’s factory in Krakow, where over 1,000 Jews were saved from the concentration camps through employment there, a story that offers hope long after the war’s end. In their journals, students reflected on how the trip has made them different, more aware and mature, as well as embracing of their degree, says Douglas.

Navigating strange streets, languages and currency in the “chauffeur-free environment,” as one individual put it, meant that students grew more self-sufficient over the 10 days. Yet their shared experiences — including the most heartbreaking — also drew the group together. “The people who were on the trip definitely made it memorable,” reflects Macomber. She adds, “This experience simply made me want to learn more."