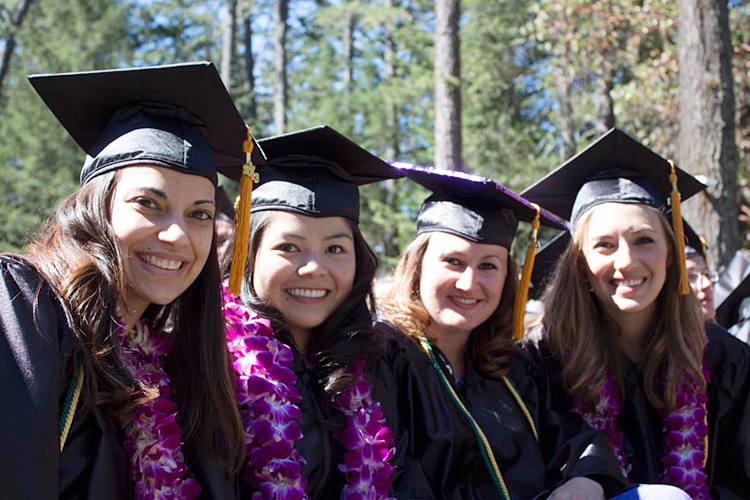 As Pacific Union College’s largest class in seven years prepared to graduate, many dads in the audience celebrated Father’s Day with a unique card: a commencement program listing their child as a 2013 graduate. On Sunday, June 16, 2013, PUC graduated its 125th class in the woodland peace—before the cheers and glad shouts—of the college’s Commencement Grove.

The weekend celebration of the class of 2013 began with Friday evening’s consecration service in the PUC Church Sanctuary. Roy Ice, pastor for young adults at the Loma Linda University Seventh-day Adventist Church and former PUC campus chaplain, addressed graduates on the topic of “One Thought Away.” The program also featured music, a class video and a presentation to parents.

Nursing graduates and their family and friends reconvened in the sanctuary later that afternoon for the nursing recognition service. The president and CEO of Glendale Adventist Medical Center, Kevin Roberts, a nurse and PUC graduate himself, addressed graduates in a ceremony that included the awarding of ceremonial nursing pins. In the cool of the Dining Commons that Sabbath evening, PUC President Dr. Heather Knight, faculty members, parents, and graduates gathered for a light reception.

The weekend culminated in the commencement service on Sunday morning. Before their stately processional down the two center aisles, the excited soon-to-be graduates posed for photos and straightened well-decorated mortarboards, enjoying their last moments as undergraduates, while others struggled to see over the colorful leis piled around their necks.

Class president Hollie Macomber gave the valedictory, and Bill Knott, editor and executive publisher of the Adventist Review and Adventist World magazines, gave the commencement address. Knott encouraged the audience to shift their gaze from “The Cathedral in the Distance” (the title of his address) to the many “broken people God puts in your path.”

Knott used the example of George Herbert, a brilliant English poet and rector who traded secular success for life in Bemerton, a small parish in sight of the world-famous Salisbury Cathedral. Despite concerns that Herbert’s intelligence was better suited to Salisbury than Bemerton, noted Knott, Hebert was truly doing God’s work by caring for those nearest him.

"All around us are the sights and sounds of real human need, the opportunities to make a significant difference in a neighbor's world," said Knott. He encouraged the multitalented graduates to "bend your considerable powers of intellect into plotting the end of poverty. Use your literary skills to write passionately about the needs of a hungry world. Harness your impressive scientific minds to develop new crops, new irrigation systems.”

After Knott’s address, graduates received their diplomas from PUC’s president, then, with a flick of their mortarboard tassels, transitioned en masse from students to PUC’s newest alumni.