By Emily Mathe and Cambria Wheeler on November 8, 2013 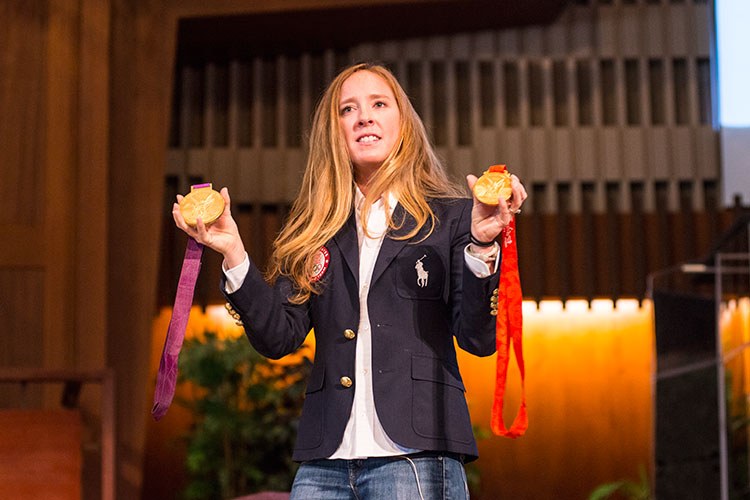 With her medals displayed on the platform of the PUC Church, Mary Whipple described her journey to gold during the November 7 installment of the Colloquy Speakers Series. Whipple was the coxswain of the United States Women’s 8+ Rowing Team, leading the team to five world championships, a silver medal in the 2004 Athens Olympics, and gold medals in the 2008 Beijing and 2012 London games.

Whipple’s presentation began with a video clip of her team’s victory at the 2012 London Olympics. The footage showed the intensity of the race, as well as the incredible precision and coordination exhibited by the American team as they crossed the finish line well ahead of the rest of the pack. Whipple’s presentation described the extraordinary teamwork and determination required on the journey to that finish line.

As the team’s coxswain, Whipple serves as an in-boat coach and calls instructions to the rowers. Her job is primarily to unite her teammates, Whipple explained. “It’s my job to turn eight individuals into one person—one dream.”

Whipple’s Olympic dream and involvement with rowing started out “innocently.” While a student at Sacramento Adventist Academy, the Orangevale, Calif., native joined a rowing team at a local aquatic center, and was eventually recruited to the University of Washington. In 2001, she was invited to try out for the national team.

As a coxswain, the 5’3” Whipple is surrounded by much taller and larger athletes. Yet, throughout her career she realized that size and strength don’t matter as much as she originally thought. “It’s not how big or strong you are,” Whipple asserted. “It’s the words you use and how you use them.”

In their first race representing the United States at the World Championship, Whipple admitted that the team thought of themselves as hotshots. They were all from different backgrounds and locations in the country, but now they had a chance to show the world that the American team was a force to be reckoned with. However, during the first race they quickly fell behind the rest of the teams, leading Whipple to realize that they needed to raise the bar to a new level of competition.

The U.S. team continued training hard, but their attitude towards the race had changed. “We made sure to back each other up and validate each other. We’d remind each other of the bigger picture,” said Whipple. After winning silver in the 2004 Olympics, they came confidently to the World Championship in 2005. After starting the race with a lead, their momentum changed drastically and they came in fourth. Instead of the disappointment tearing the team apart, Whipple said they learned to support each other through even more intense training.

After their fourth-place finish in 2005, the U.S. Women’s Eight took the 2006 World Championship, kicking off a 6-year winning streak that included gold medals at the 2008 Beijing and 2012 London Olympics. Whipple remembers the hard work and dedication it took to win those races. “When I look at these two medals, I see two very different journeys to the finish line,” she shared.

Though her accomplishments include medals and world records, Whipple’s proudest achievement was realizing her team was victorious because of their mutual support and collaboration; it was never something she could have done alone. She also recognizes the personal support that played a part in her Olympic success. “Faith is what allowed me to be a leader among my teammates,” she says. “It’s about how we did it as a team, and being a part of something bigger.”

Before inviting students to take a closer look at the medals she had brought, Whipple brought forward a challenge to the audience: “How do you want to be remembered? What impression do you want to leave on your journey?” After the closing prayer, a crush of students came up to the stage to see the gold and silver medals and to meet Whipple in person.