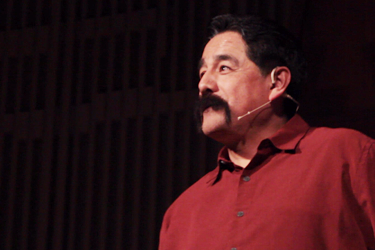 Popular Seventh-day Adventist preacher and PUC alumnus José Rojas encouraged students to spend a year of their lives in service abroad when he returned to Pacific Union College to speak at a special event, Tuesday, October 23.

An internationally sought-after speaker and bestselling author, Rojas is the director of the office of volunteer ministry for the Adventist Church in North America. The office promotes volunteerism through community projects, missions, and other activities.

Citing the biblical call for Christians to be salt in the earth, Rojas drew an analogy between service to others and salt role’s as a catalyst in melting ice. Saying today’s students are part of the most advanced generation in history, he appealed for them to use their abilities to become catalysts for change.

“If your mind is that of a catalyst, if you’re out to make this world a better place no matter how many people make fun of you for being an idealist—if you really have a vision for your life—then you can turn this world upside down,” he said. “Go off and be a catalyst around the world for one year of your life.”

He urged students to participate in service and mission opportunities while in college. In addition to the Adventist Church’s student mission programs, Rojas mentioned government programs such as the Peace Corps for international service and AmeriCorps for domestic volunteerism, as opportunities for service.

“We have a million American young adults going around the world, across the countries serving, and most of these people don’t even know Jesus,” he said. “It changes your life when you serve. Jesus said, ‘if you really want to know what it means to serve me, do unto the least of the people as you do unto me.’ You wanna serve God? Serve people.”

“PUC already has incredible projects—for the homeless, projects for Calistoga—you got stuff going everywhere!” he enthused. “I praise God for the vision of this campus which has been steady for many years.”

Rojas also reminisced on living in Newton Hall as a student at PUC from 1978 to 1982. He recounted meeting his wife, a PUC alumna, and getting to know her, exclaiming that he could still remember exactly where they met on campus. “I met her here, I’m emotional about it,” he said.

He grew academically and socially as a PUC student, he said. “I owe a lot to PUC, I went in a boy and came out a man. I had a mustache [and] it grew bigger while I was there.”