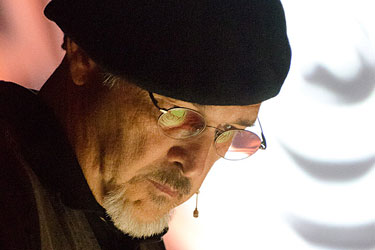 At the opening Vespers program of the school year on Sept. 28, the Pacific Union College family remembered a student who passed away during the summer. The program also featured Joe Castillo, a Christian artist who recently performed on the television show America’s Got Talent.

To open the program, Campus Chaplain Laffit Cortes invited up the parents of Josh Highness, the former PUC student who passed away over summer. Highness’ best friend and girlfriend were also invited on stage. Cortes read Romans 12:15, which instructs Christians to “rejoice with them that do rejoice, and weep with them that weep” (KJV).

Student Association President Samantha Angeles and Student Association Executive Vice President Danielle Hagood presented the family with a bouquet of flowers as a small reminder that they are in the hearts and prayers of many on campus. Angeles also reminded them that PUC is the place to find comfort and prayer in this time of need, and that the campus community is always ready with open arms.

Rick Highness, Josh’s father, shared his analogy of what God’s role is like in our lives. He said that God is like our coach but we are not all meant to be star players — some of us are to be equipment managers or players on the bench; we may be yearning to be put into the game, but God has other plans for us. In those moments, Highness said, we need to have faith and trust that God has put us in the right spot.

Tad Worku, ‘08, sang an original song entitled “Welcome Home” as the PUC family comforted Josh’s friends and family and expressed support. Many tears were shed as all meditated on the words Worku sang about a future world without pain and a time when all will be held in Christ’s arms and finally welcomed home with Him.

Following the memorial to Josh Highness, Student Association Religious Vice President Cameron Haley introduced a recurring segment called “I Saw Jesus,” in which students shared experiences they had with people who showed Jesus to them throughout the week.

After a number of students came forward to share their experiences, Cortes introduced featured speaker Joe Castillo. An artist and an ordained Methodist pastor, Castillo shared how a spilled bag of white sand had inspired him to pursue a unique medium. From there, he began to explore how he could use art to convey important messages to live audiences.

“I realized the power of visions, of the arts,” Castillo remembered. “Particularly when they’re combined with story.”

In June 2012, Castillo became involved in the seventh season of TV’s America’s Got Talent. “[I] never aspired to be on television, never aspired to be famous,” Castillo said. “It just wasn’t on my radar.” In fact, it took three phone calls from America’s Got Talent asking him to perform on the show before he finally accepted. It was his wife that told him this may be God holding the door open for an opportunity, so he took it. Castillo became a finalist in the competition.

At Friday’s Vespers, Castillo gave a presentation that portrayed two messages in sand images projected onto a screen: one of the creation story and another of God’s love story. “At its very foundation, God’s story is a love story,” Castillo said. “And if somebody asks you, ‘How do you really know that God loves you?’ … Of course, the answer to that is simple. God stepped off His throne, He took off His crown, He took off His robe. He put on a human body, He put on an earth suit, and He came and walked among us. And then He was willing to allow Himself to be beaten, abused, ridiculed, mocked, crucified. And He did it because he loves you.”

After Castillo’s presentations, Assistant Chaplain Manny Gonzales touched on the story of Paul’s conversion on the road to Damascus in Acts 13. “I can’t wait to see how many more blessings You have in store for us, God,” prayed Gonzales.

Closing the program, Cortes baptized two PUC students—Meena Kim and Miranda Milland. A handful of other students came forward, after the night’s program, to express their desire to commit their lives to the Lord through baptism.