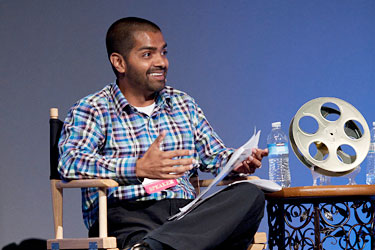 Rajeev Sigamoney comes to Pacific Union College following a career as both screenwriter and producer in Southern California. He earned both a bachelor’s and master’s degree at Johns Hopkins University in Maryland and pursued additional training in filmography in Southern California with the Act One program and through the University of California, Los Angeles. He also regularly participates in a number of film festivals including SONscreen, a festival created by the Adventist Church for young Christian filmmakers.

“Rajeev is very credible as both a writer and producer,” says Milbert Mariano, chair of the department of visual arts, noting Sigamoney’s considerable involvement in the film industry and Christian media. “He brings a very strong, incredible screenwriting background to the program that’s very useful for television and film.”

Many students are already familiar with John ‘Tag’ Tagamolila, who is officially joining the department full-time this fall as resident artist after spending the 2011-2012 school year as an adjunct member of the faculty. A graduate of Cornell University, he comes to PUC after spending over a decade in the industry, filming in New York City, Chicago and most recently, Hollywood. He has worked on numerous major films including the Oscar-winning production, The Fighter, and television shows such as Gilmore Girls, Star Trek: Enterprise, Fastlane, and Community.

“Our students have always had really good stories to tell,” says Mariano. “Tag brings a lot of technical expertise in filmmaking to the program. There are a lot of different elements in film that make it or break it and if one element is missing, it breaks it. Tag helps students bring together all the production elements they need.”

Also joining the department of visual arts this fall is Brian Kyle, who will serve as a part-time instructor of photography. Kyle graduated from Pacific Union College in 2004 with degrees in graphic design and photography, gaining distinction by becoming one of the first graduates to submit digital photography for his thesis project. He returns to PUC with extensive professional experience in both design and photography.

“Brian is definitely a forward looking photographer and designer, but he also looks to the past,” says Mariano. “He loves vintage and traditional photography even though he’s very well-versed in the digital, helping make him a quality addition to teach photography.”

The new faculty represent a response to significant enrollment growth in the department of visual arts and in the film and television program. In addition to the hirings, the department is renovating many of its facilities this summer and is completing the digital transition of the film program with the purchase of new Panasonic HVX and Canon C300 cameras. The department also recently announced the introduction of a bachelor of fine arts program to begin this fall.