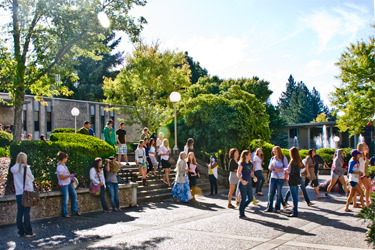 After a quiet summer at PUC, the campus has come back to life as the 2010-2011 school year officially began on Monday, September 20. As students begin classes last week, early registration figures indicate that enrollment will increase this year compared to 2009-2010; it will be the college’s second consecutive year of growth.

“It was exciting to see that there were [students’] cars double-parked all throughout the Winning parking lot,” said Scott Callender, PUC’s director of enrollment. “We’re definitely on track to see an increase this year.”

The bustle on campus began Wednesday the 15th as PUC welcomed hundreds of new students to campus on Freshman Move-In Day. Freshmen eagerly made their way in to their first college dormitory rooms with the aid of parents and friends. PUC faculty, staff, and student leaders also provided assistance, volunteering in an annual tradition known as “Porter Power.” These campus volunteers helped new students carry in boxes and furniture and offered information and advice about campus life.

“We've eagerly anticipated the arrival of our many freshmen, and they finally arrived!” said Lisa Paulson, vice president for student services. “We are going to have a great school year!”

Over the weekend the new students headed to Sebastopol, Calif. for Fusion, PUC’s annual freshman orientation retreat. There the students bonded with their new classmates, learned a bit about what to expect from college life, and heard a message of encouragement from Warrie Layon, this year’s Student Association president.

Freshmen were also introduced to this year’s SA theme for the campus: Represent. “It’s a challenge for the student body to find something positive to represent—cultural diversity, their major, their dorm—and not just sit around all year and go through the motions,” says Layon. SA plans for this year will revolve around helping students find that driving passion in their lives.

As the freshmen prepared themselves for the year off-site, most other students moved onto campus over the weekend. By Sunday afternoon the campus was almost fully repopulated.

Many returning students were pleasantly surprised by a host of renovations around campus, including the Dining Commons and several dorms. “Winning Hall and the cafeteria look great!” says Cristina Alba, ’11, a senior communication and history major and member of PUC’s Student Senate. As a senator, some of her goals this year include advising the administration on the student response to the campus changes and suggesting areas for further improvement.

Returning students got their first glimpse of the changes to the Dining Commons at the Welcome Back party Sunday evening. Student Services hosted the event, which provided free food, movies, a variety of games, and a chance for students to mingle and relax before the start of classes the next day.

As the campus returns to business and the start-of-the-year rush dies down over the next few weeks, the PUC administration will be able to gauge the full scope of this year’s enrollment and registration figures, and the official report will be released within the next few weeks. Last year PUC’s total enrollment, including off-campus programs, grew by 11 percent compared to the previous year.