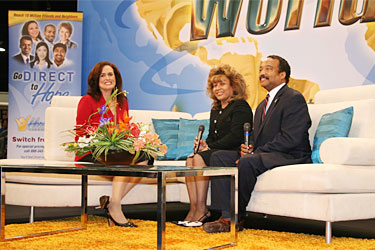 During the 2010 General Conference World Session in Atlanta Georgia, the Hope Channel featured Pacific Union College President Heather Knight and PUC Outreach Chaplain Norman Knight on a special edition of “World of Hope.” The episode, taped on July 2 in front of a live studio audience in the World Session exhibit hall, focused on Knight’s appointment as PUC’s first female and black president and the couple’s ability to balance a high profile careers and family.

Show host Kandus Thorp started the interview by asking how Heather manages such a hectic life as an administrator, pastor’s wife, and a mother of a large blended family.

“Well, one thing I do believe is that when God calls on you to do something, he also empowers you and equips you to get the work done,” said Heather, who has worked in education for more than twenty years. Heather also stated that most important is to “start each day with prayer and you really have to ask God for wisdom.”

The couple, who married in 2003, also shared how they raised eight children—all of whom are college graduates or completing their college degrees—by building a corporation of sorts with their family.

“We put together the spiritual expectations of the family, household chores—what everyone is expected to do, the different skill sets that we wanted everyone to know, academic expectations, we put together a mission statement,” said Norman. “And we pounded that out for three, four months, then presented it to the children. And we got their input… and once we put it in motion, it flowed very normally for us.”

Thorp asked about women in leadership and the reluctance of some cultures to accept females in such roles. The couple discussed how in their marriage they have had to share leadership roles depending on the context. At Andrews University, where Knight was provost for three years before her appointment at PUC and Norman a professor, Norman was the provost’s husband. On Sabbath, Norman assumed his role as senior pastor of the Berean Seventh-day Adventist Church in South Bend, Indiana, and Heather was the pastor’s wife. They worked together to be sensitive to situations and to support each other in their work.