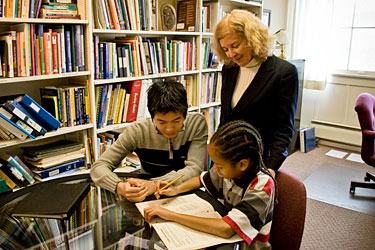 Sporting a bright yellow t-shirt and a magnetic smile, sophomore biochemistry major Anthony Yeo sits at a table in the Pacific Union College library to take a break from studying for a cell-molecular biology exam. Seventeen units and three science classes is a lot to take on for a 19 year-old student, but Yeo discovered a secret weapon to combat stress while generating altruism in the town of Angwin: mentoring.

“It’s a great opportunity to help someone,” says Yeo. “And for that hour each week, I don’t have to study anymore!”

A self-proclaimed infectious happiness virus, Yeo was ironically matched up with a fifth grader named Patrick who Yeo considers to be “pretty mellow.” “It’s almost like a game trying to get him to open up,” Yeo laughs. “But I really enjoy spending time helping him; it’s very rewarding.”

Dr. Margo Haskins, associate professor of education, started the mentoring program last winter after she spoke to the campus about “the importance of showing God’s love in tangible and real ways,” she says. “I got to thinking, ‘Okay, I’m throwing this out there, so I need to bring something to this campus that will be meaningful to everyone involved.”

Haskins first became interested in mentoring when Pastor Bill Loveless, former president of the Columbia Union Conference, told her about a program he started at his church. The schools in his area identified at-risk children from Washington D.C., and these children would meet once a week for an hour with a tutor from the program. The schools then conducted a post-test in which they found that these children had an average gain of three academic years. “It wasn’t just the academic help,” says Haskins. “It was because the children saw that somebody really cared for them to come help them, so they saw that it was worth it to work on studies.”

Seeing such a tremendous impact on the children in Maryland, Haskins was inspired. She announced that there would be an informative meeting for anyone who was interested in becoming a mentor. She was surprised to see 26 students, including Yeo, eagerly waiting to sign up to tutor at two local schools: Howell Mountain Elementary and PUC Elementary. “We have pre-med students, history majors, all different kids of people,” Haskins says, gesturing emphatically. “They’re all excited because it takes one hour once a week, and it can impact the life of a child forever!”

Not to mention the life of a busy college student as well. While Yeo acknowledges the numerous positives the program brings to the children, particularly the direct, one-on-one attention, he cannot help but mention another benefit he has received himself: a potential career shift. “I’m now seriously considering a career in pediatrics,” he says. “And that’s something I hadn’t thought of before.”