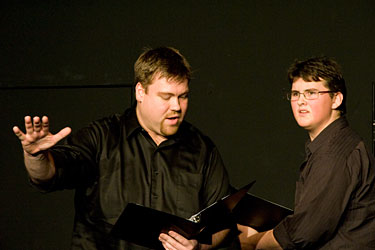 This February, the Dramatic Arts Society at Pacific Union College hosted "Inspired By," a new works festival featuring three original plays. Each play was performed once as a staged reading after 12 hours of rehearsal, and audience members provided input on strong and weak points. The casts and directors then went back to work to develop the plays further before performing a second reading.

"Kingdom Borrowed: A Tragedy" was written by current drama senior T. K. Widmer, who plans to pursue an MFA in theater pedagogy, and directed by alumna Heather Denton. The play is about the biblical King Saul, looking at the familiar story through Saul's eyes rather than David's.

Current English major Peter Katz's "The Hectic in My Blood" was directed by alumna and drama program director Mei Ann Teo and inspired by Hamlet. The play is about a three-person performance of Hamlet that goes wrong when one of the players begins to lose his grip on reality.

All performances were in the Alice Holst Theater on campus, with appreciative audiences of students, faculty, staff, community members, and alumni enjoying the performances and giving useful feedback.

Additional productions and classes upcoming this year include a Dramatic Arts Society production class, fundamentals of dramatic performance, a Bay Area theater season class, and the annual One Act Festival.