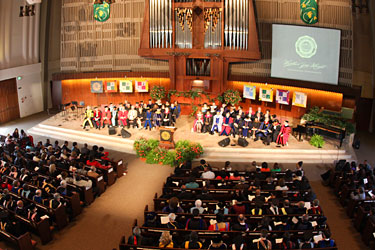 In September of 2009, Dr. Heather J. Knight became the new president of Pacific Union College. On April 15, 2010, the college hosted the official inaugural ceremony and installation of Knight as 21st president.

Dr. Knight was also presented with gifts from four representative groups at PUC: a crystal bell from the administrators, a miniature grape vine from the faculty, a painting by former PUC art department chair Vernon Nye by the staff, and the promise of a hot-air balloon ride from the student body.

Following the presentation of the presidential medallion, installed by PUC Board of Trustees chairman and Pacific Union Conference of Seventh-day Adventists president Ricardo Graham and immediate past PUC president Richard Osborn, Knight gave an inaugural address. She expressed gratitude, spoke about PUC's history and calling, and presented her platform of "The Adventist Advantage" as well as what she sees as "the PUC advantage."

Knight called this time a "moment for PUC to reaffirm our rich history and heritage and also to envision a bold and significant future, one in which we prove responsive to the major opportunities and challenges facing American higher education today, and one in which we articulate the great value of an education framed in the Christian liberal arts tradition."