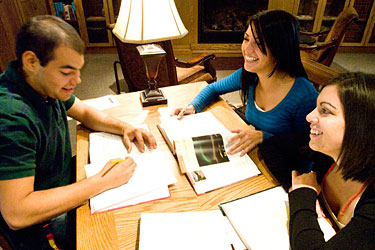 Pacific Union College was ranked among the region’s 10 best baccalaureate colleges by U.S. News and World Report’s annual “America’s Best Colleges” issue—one of the best-known and most reputable sources for college rankings. This is PUC’s 17th consecutive year on this list, which was released online this week. In addition to the recognition for outright quality of education, PUC was also ranked number two in the region for ethnic diversity, and number three for value.

"Pacific Union College is again thrilled to be recognized as one of America's Best Colleges by U.S. News and World Report,” says PUC president Heather J. Knight. “This recognition highlights PUC's ability to make a distinctive impact and to deliver superior performance over a long period of time.”

PUC, ranked number 10, is in a category for institutions that focus on undergraduate education and grant fewer than half their degrees in liberal arts disciplines. The ranking evaluates more than 1,400 American colleges and universities. Regionally, PUC competes among colleges in 15 western states, stretching from Hawaii to Texas.

High scores are based on such elements as peer assessment, graduation and retention rates, faculty resources, student selectivity, financial resources, and alumni giving. Ethnic diversity is evaluated as the proportion of total minority groups to the whole student body. Value is calculated as overall quality of the institution per average tuition minus average total of grants and discounts.

“PUC's special recognitions for its celebrated ethnic diversity and its value make us an even more attractive choice and investment for families in hard economic times," says Knight.

PUC’s regular recognition by U.S. News serves as a reminder of PUC’s strong heritage of academic excellence. PUC seniors in many disciplines consistently score well above the national average in Major Field Achievement Tests. They have a high acceptance rate with many top-notch graduate schools—especially pre-medical and pre-dental programs. This spring PUC’s nursing program achieved a 100 percent board pass rate and is on track to repeat this feat in the current quarter. The college offers over 90 degrees and emphases, ranging from collegiate staples like business and the medical sciences, to unusual programs like aviation, to new and innovative programs like film and television and environmental science.

This year’s “America’s Best Colleges” issue of U.S. News and World Report will appear in print on newsstands August 31, and the accompanying “2011 Best Colleges” guidebook will be available August 24.