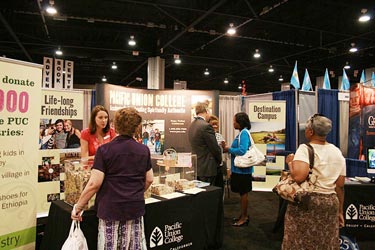 At the Seventh-day Adventist General Conference session in Atlanta this summer, visitors to the Pacific Union College exhibit booth were confronted with a tough decision. They had to choose between donating money to an organization that mentors children in California, providing shoes for families in Ethiopia, or building a village in Nicaragua.

"They are all such good causes!" said one visitor to the booth. "I don't know how to choose!"

Some wanted to give to all three charities—a generous spirit that was helped by the fact that PUC was giving them the money to donate. For this General Conference PUC eschewed the usual giveaways that dominate convention exhibits and allocated $5,000 for student ministries instead. The decision of how to distribute the money was left in the hands of visitors, who were given wooden tokens that could be dropped into one of three boxes representing the ministries. At the end of the 10-day session, PUC would count the tokens, each representing 50 cents, and then write checks to the student ministries for the amounts collected.

The project fits in with a culture of giving and volunteerism that is deeply ingrained at PUC. "It's just another example of how PUC has this mission—that our students leave here with integrity and a passion to serve. And when I hear it in our current students and see it in our graduates, it just says we're realizing our mission," says Lisa Bissell Paulson, vice president for student services. "Service is a big deal here because our students make it a big deal."

The three projects featured at the General Conference are favorites of the PUC community: