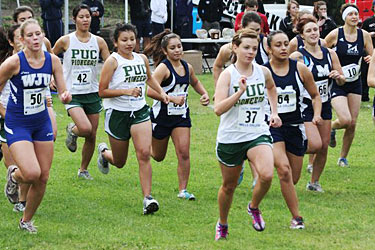 Pioneer cross-country team member Sophie Grise was named an All-Conference representative of the California Pacific (CalPac) Conference of the National Association of Intercollegiate Athletics (NAIA). The honor was bestowed at the CalPac Conference Championship in Oakland on November 5.

This is the second consecutive All-Conference award and fourth top ten conference ranking for Grise, a senior exercise science major from Welches, Ore. Normally this recognition qualifies a runner to race in the NAIA Cross Country Championship, to be held this year in Vancouver, Wash. On November 20. However, the national championship match is scheduled for a Saturday—a fact that has kept Grise home every year she has been invited. Seventh-day Adventists, including Grise and most of the student body at PUC, observe Saturday as a sacred day of rest, and typically do not compete in sports on the day.

It seems like it would be disappointing turn of events, but Grise’s speed is only matched by her unstoppable brightness and positivity. “It’s okay!” she chirps. “When you sign up to go to a Christian, Seventh-day Adventist school, you can’t really get upset.”

That unstoppable attitude is what has driven her to such high achievement as a runner—even though she’s much smaller than many others at the starting line. “I put in a lot of hours and I work hard,” she says. “I don’t conserve energy when I race. But there’s always going to be someone faster than you, so you can only do your best.”

People who watch her and run with her can attest to that internal advantage. “You can just see it when she’s in position at the starting line,” says Pioneers cross-country coach Bob Paulson. “She’s got her game face on every time.”

The CalPac championships marked the end of Grise’s last season of collegiate competition, but the team hasn’t been her only running outlet and she plans to continue with her sport. “I do marathons and I do triathlons,” she says. “I do everything. I just love to run.”