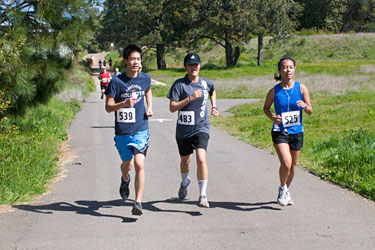 For this year's student-led Revo project at Pacific Union College, the coordinators decided to host a benefit 5K run as well as the annual rummage sale, concert, and fashion show. Both events are to raise money for a local kids ministry and to treat a foot disease in Ethiopia caused by not wearing shoes.

The race took place on Sunday, April 18, and the students were hoping for 100 racers and some decent weather. Instead, they had 125 racers and a gorgeous day. PUC cross country coach Bob Paulson laid out a fairly simple 5K course for the runners as well as an easy route of about two miles for people who preferred to walk. "We had so much rain, it was a bit of an obstacle course," Paulson reports. But he says people just had fun with the challenge. "Everybody seemed to have a blast."

The student leaders were also very pleased to see some runners who were not from the campus. "I was surprised at how many runners were not students," reports Tyler McCulloch, one of the student organizers for the event. "We had people from Fairfield, Napa, and beyond."

With a beautifully fair day squeezed between rainstorms and a great local turnout, the Revo team was inspired by and appreciative of the event's success. And the participants enjoyed a really good excuse for a thoroughly enjoyable morning. "Everyone was happy to be out enjoying the good weather, getting some exercise and helping a good cause," McCulloch says.