Soccer Pioneers: A Kick in the Right Direction 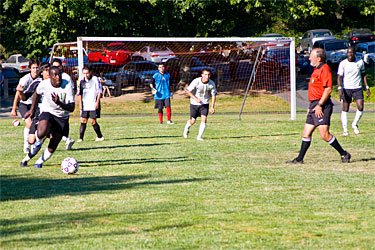 It wasn't long ago that men's soccer became an official varsity sport at Pacific Union College; but in an amazing turn-around season this year, the soccer Pioneers set a precedent for a strong soccer program that may have a lasting legacy for the college. The soccer team, who ended last season with three wins, nine losses, and one tie, set the record at PUC for most wins in a season this year with nine wins, two losses and one tie.

Several changes to the team dynamics contributed to the Pioneers’ success. Until this year, head coach Jesús Medina had been the only member of the coaching staff, leaving him alone to carry the burden of playing multiple roles. This year, however, Medina was joined by his brother Carlos and by Hernan Granados, dean of Newton Hall, to share responsibility over the team. Carlos led the team in the technical and strategic aspects of the game, and “Hernan is basically the dad of the people here,” said Medina. “He’s everything for the guys.”

Notes team member (forward) Edrei Mauries, “With the support of older and wiser leaders, we feel more confident in the game, and it showed a lot this year.”

The addition of a key player didn’t hurt either. Freshman Randy Castanaza walked onto the team as a goalkeeper, and quickly worked his way to the starting position. Castanaza was recognized for having the most saves ever in PUC history. He, along with teammates Mauries and Brandon Voigt, won Player of the Week awards within the league several times each.

According to Medina, this year’s team was exceptionally evenly talented in all aspects of the game. “We have a very strong defense, very technical midfield, [and] our attack is…scary!” Additionally, the team owed some of their success to the defenders: Having a view of the entire game, “vocal defenders” Alberto and Mario Benitez, Colin Davis, and senior captain Isaac Anjejo led the team by instructing their teammates from across the field. “We had great team leaders that led by example,” he said. “Their voices really made the biggest difference in guiding the team to success.”

All in all, the men of the Pioneer soccer team concluded a very satisfactory season this fall. “This is the beginning of a very important soccer program at PUC,” Medina says. “It took a lot of work, but it’s been a pleasure seeing ourselves becoming what we’d hoped to be.”