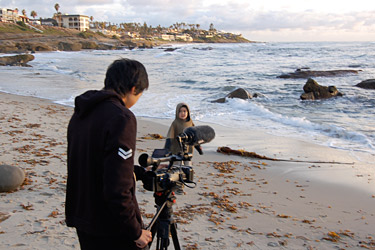 Pacific Union College freshman Peter Han won first place for public service announcement (PSA) in the second annual "Preserve Our Planet" National Geographic college film and PSA contest. His film, "Why Would You," earned him $3,000 in prize money and a trip to Washington, D.C., in June for the annual global gathering of National Geographic Explorers.

Han's win was a result of chance, confidence and good film-making. Just as many students do, Han was passing through the halls of Fisher Hall, home of PUC's visual arts department, and noticed an advertisement for the contest, which many had passed and few had noticed. However, Han took initiative and took a part in the contest.

So when everyone else was enjoying the festivities of the Christmas season, this film & television and biology major was out with his camera, letting his creativity roll. He made the December 31st deadline and completely forgot about the contest until early April, when he got a call that informed him of his win. "I was surprised," says Han. "I wasn't really expecting to win, I thought I'd win second or third place."

Han's PSA, titled "Why Would You?" features a little boy asking why people do things to destroy the beauty of the ocean. One of Han's visual arts professors, Alexander Carpenter, says, "The PSA's strength lies in its single, simple message and economical use of imagery and sound to drive it home. It builds toward a strong, but light-handed emotional connection with the audience. Peter deserves credit for being willing to evoke feeling, a rare but essential filmmaking trait in our irony-soaked visual culture."

Interestingly enough, Han's fascination with film & television production began with the idea of "evoking feeling." "This is what I am really interested in -provoking emotions in the viewer - whether it be painting, photography, or film," he says. "I found that film is an extremely effective medium to capture the human spirit and the human condition."

The contest judges selected the winners and runner-ups based on creativity, reflection of this year's core idea that "Together We Can Make a Difference," and production value - visual and story strength. Winning and select finalist PSAs were broadcast nationally as part of NGC's Earth Day events during their premiere programming on Wednesday, April 22.