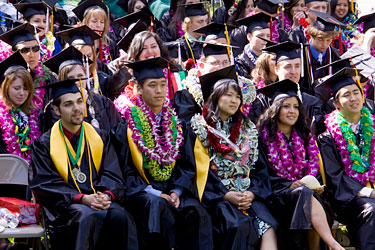 Various programs, dedications, and meet-and-greets take place during the entirety of Graduation Weekend, but the focal point of the affair is Sunday morning in the wooded area known as Commencement Grove, at the top of the hill. Family members arrived not long after a chilly dawn to save the best seats. As graduates began to gather near McReynolds Hall to line up, the most common activities were the adjusting of hats and the snapping of photos, while questions included "Where do the faculty line up?" "Do you sell hot chocolate?" "Where are the leis being sold?" and "Honey, where's your camera?"

Although graduation is a time of some pomp and seriousness, students always make it a personally meaningful event. "Not For Sale" lettered on one cap celebrated the cause that students raised $10,000 for two years ago. Pink ribbons on a married student's robe formed the letters "I O U," which he said were for his wife, who put up with him as he finished his degree. Others kept up the tradition of flinging corn tortillas into the air throughout the program.

PUC president Richard Osborn and his wife, family pastor Norma Osborn, spoke briefly about their time at PUC, since this will be Osborn's final graduation as president as he transitions to a position with the Western Association of Schools and Colleges. "[PUC] has students that are diligent, creative, fun, spiritual - and Dick and I have thoroughly enjoyed… all the ways in which they have shared their talents with us through drama, music, art, project presentations, you name it - it has been an honor to be here," Norma said.

This year, Ricardo Graham, chairman of the PUC Board of Trustees and president of the Pacific Union Conference, addressed the graduates. "Best wishes, congratulations, go forward and conquer your world!" he told them. He also commended Osborn, who, he said, "has guided PUC, with integrity and precise analysis of the challenges and opportunities that face this education institution - Christian based, faith oriented - into the 21st century." He added, "Fearless and courageous, Dick has tackled some of the biggest challenges that have come to PUC." Graham presented to Osborn a chair with the seal of PUC and the dates of Osborn's presidency emblazoned on it.

Theodore Benson and Milton Hare, who received honorary doctorates, were also present at the ceremony and spoke to the students. Hare spoke at some length about his ministry taking lunches to the homeless in Oakland, California, "searching out the isolated encampments of those who only God and his followers take time to visit." Four years ago, he recounted, students and others from the Angwin community first connected with the ministry by gathering clothing, jackets, blankets, and hygiene kits. "Since then," he recounted, "we've been joined by a steady stream of loving Christians from the PUC community who have had the courage to minister with us to an urban population that have traditionally been neglected by the Adventist church."

The main address at the program was given by the Honorable James Chang, a retired judge from the Santa Clara County Superior Court who also attended PUC. "Do you want a title, or a testimony?" he asked the graduates. "What are you going to shoot for? The external trappings of success? Or are you able to be one of God's people?" Title by itself, he said, is not wrong. But, as he said, "It's a question of focus and priority. What is your focus? Is it contribution or recognition?"