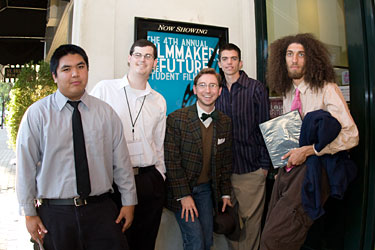 The 4th annual Student Film Festival showcased the work of Pacific Union College student filmmakers to the community, with two screenings at the Cameo Cinema in St. Helena on June 4. Enthusiastic audiences viewed seven films, one trailer for a feature film, and the college's video yearbook.

The festival featured the work of students Charles Johnson, Marcus Aurelius Klonek, Timothy Wolfer, Peter Han, Nicholas Lampke, and Raphael Jimenez and alums Zach Dunn and Geoff Kegley, with offerings ranging from Public Service Announcement (PSA) to "mockumentary." Han's PSA "Why Would You?" and Wolfer's documentary "Grow Up," which screened at the festival, have both won film awards this year.

After the screenings, the filmmakers participated in a Q and A session moderated by Rodney Vance, director of the film & television production program at PUC. The students answered questions about challenges, why they chose their topics, and what will come next. For Raphael Jimenez, creating his comedy film for the first tri-club banquet with the Asian Student Association, Korean Adventist Student Association, and Student Organization of Latinos was a compelling introduction to filmmaking. "I really loved making that film - it was my first one," he said. "I really liked the process." When asked what comes next, Jimenez said, "Developing my craft - learning as much as I can to make my next film better."

"What's next" for two other students includes some professional experience. Timothy Wolfer, whose award-winning documentary beautifully chronicles life on an orphanage in Bangladesh, received a call the day of the festival asking him to go to Sudan to do film work. Ryann Pulido, who created an exceptional video yearbook this year because he "wanted to make something that reflected my love for the school," will work on the camera crew on a documentary about the U.S. track and field team that won more Olympic medals than any other.