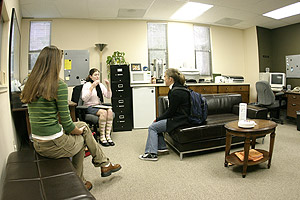 New campus chaplain Roy Ice, assistant chaplains Dustin Comm and Christy Ward, and the world missions and campus ministries leaders have been working energetically to connect personally with students and to be actively involved in campus life. But they feel that their ministry will be more effective if their office is a welcoming, happening place.

“Before this year,” explains Comm, “a lot of students didn’t even know where the Campus Ministries Center was. Now we want it to be a place where the students feel like they can come and hang out.”

So over Thanksgiving break, Ice and Comm went to work on some interior renovations. They took down old partitions, opening up the center office area, and painted one long wall a deep olive green. The addition of some simple leather furniture, black-and-white student photography of “hidden crosses,” and slick message boards have given the office a new look.

At an open house following the first Winter Spiritual Revival meeting last week, the Campus Ministries Center was stocked with chips, hot cocoa, and a pleased office staff. “Some of these things may seem superficial,” Comm says, “but it’s all part of the campaign to be more connected.”

The effort is paying off. So many people came to the open house that there was a line waiting to get in; and Comm adds that the overall number of people coming into the office for questions or meetings has increased as well. Plus, he says, “half the people that come in now come in to say ‘hi’ or hang out.” And that’s exactly the atmosphere the Campus Ministries Center was hoping for.