DNA, a Nobel Prize, and Asking the Great Question 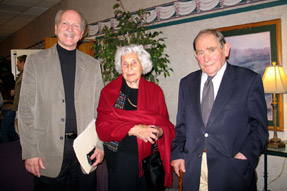 “People say the Nobel Prize is the stamp of achievement in the science world,” said Sydney Brenner. “But I don’t think it’s the prize that really counts; it’s what we do in our scientific lives.”

Brenner, presenting a lively sense of humor in his gruff British accent, gave a lecture on How to Win a Nobel Prize at Pacific Union College on Monday night, January 30. He was the 8th scientist to present for the Breakthroughs in Science lecture series, coordinated by the biology department. Brenner, age 75, won the Nobel Prize in 2002 for his work on genetic regulation of organ development and programmed cell death, and he has a long history of highly influential research, including pioneer work in genetics and molecular biology and discoveries that have been significant for medical research.

In a lecture that included scientific references but was also peppered with humorous anecdotes and illustrations to keep the broad range of attendees engaged, Brenner talked about the discovery and exploration of DNA, the issue of contemporary people’s “misplaced sense that we can achieve everything by high technology when we actually just need to think practically,” and the importance of realizing that “you are much more than your genome—you are people with emotions and memories.”

During a question-and-answer session at the end, Brenner also touched on some controversial subjects such as stem cell research and intelligent design.

But what Brenner seemed most intent on conveying to the many students, faculty, staff and community members present was a challenge to the young generation to be realistic, practical and to ask great questions. He explained that finding relevant scientific answers depends on identifying the problems that are within the reach of this generation, asking the great questions, placing proper value on knowledge, and putting in lots of hard work.

Terry Trivett, chair of the PUC biology department and coordinator of the Breakthroughs in Science series, is grateful for the insights Brenner and other eminent scientists have brought to the campus. There are “both scientific and cultural benefits to this lecture series that make it compelling,” he explains. “The value of the series is in being able to listen to the scientists themselves, not as reported by someone else. We have found a fresh vigor in hearing a scientist present a great idea or problem that is relentlessly pursued.”

Pacific Union College began the Breakthroughs in Science lectures in 1997, inviting eminent, world-class scientists to present a synopsis of their research. Most of these scientists have been Nobel Prize recipients, receiving international recognition and widespread acclaim for their work. Presenters are selected because their discovery is not only outstanding in its own field, but also because it has proven to be a significant influence on other scientific disciplines. The Breakthroughs in Science lectures are underwritten in their entirety by John G. Jacobson, M.D., an alumnus of Pacific Union College (1967, chemistry) and resident of the Napa Valley.
Prev ArticleNext Article